James Sanders, Jr. lived at 52 Beacon Street with his parents, Mable and James Sanders, Sr., and ten siblings. Mrs. Sanders had moved to Newark from Richmond, Virginia when she was 17 and worked as a nurse’s aide at Parmer’s Nursing Home in Summit, NJ. Of her eleven children, Mrs. Sanders told journalist Ron Porambo, “James was my favorite in many ways, he was really a good boy. He hadn’t started smoking yet and never got into trouble like other boys his age. He was retarded, you know. He was always getting beaten up, little boys ten years old could beat him up. He wouldn’t fight back, that was part of his retardation.”

Mrs. Sanders said she last saw her son James before she went to bed Thursday night. She woke up the next morning, went to work in Summit, and returned home around 6:30 P.M., with no sign of James. According to his father, James had gone out Thursday evening to visit his friend Willie Perry’s apartment at 298 Bergen Street. From there, 16-year-old James had gone on to his girlfriend’s house, some three blocks away from Willie’s.

Earlier that night, protests at the Fourth Precinct resulted in clashes between demonstrators and police and the disorder quickly spread to other areas of the city. On Springfield Avenue, “looting and vandalism” became “intense” after 9:00 o’clock. Shortly after midnight, Newark police officers reported “sniper fire” in their direction and requested permission to “use their firearms in order to retaliate.” This retaliation, however, would not be limited to alleged “snipers.”

Around 4:00 A.M., James Sanders was caught looting at Sampson’s Liquors at 77 Jones Street on the corner of Springfield Avenue. According to Porambo, who investigated the shooting, “As police arrived, Sanders had crossed Jones Street and run down the east side of the street toward a vacant lot a block away…”

As police pursued, the 16-year-old Sanders allegedly “turned and threw a bottle at them.” The officers in pursuit responded by opening fire on the boy. Porambo continued, “The shotgun blast…hit the boy full in the back, blowing him away like a large rag doll. Morgue photographs again told the story of Double O ammunition Newark police were using in their shotguns. Seven of the nine slugs hit the boy in the back, three going right through his skinny body.”

James Sanders was dead at the age of 16 after having been, in a matter of seconds, accused, convicted, and sentenced to death by Newark Police officers for looting. The boy’s body lay unidentified at the morgue for eight days while his parents searched for his whereabouts. When they eventually found him, Mrs. Sanders later said, ‘They showed my husband some pictures. He said James was all shot up.’ 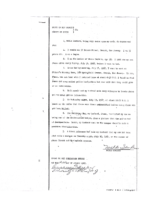