Michael Pugh lived with his mother and brother, Andrew, at 340 15th Avenue near the corner of Hunterdon Street. Mrs. Pugh had lived in that apartment for the past 20 years.

Around 11:00 P.M. Sunday, July 16th, Michael was outside playing with his friend “Smokey” when his mother called him upstairs to take out the garbage. The street was calm and well lit by a light pole directly outside the Pugh’s apartment building.

The city, by this time, was quieter than it had been since Wednesday, when John Smith was arrested and beaten by Newark police outside of the Fourth Precinct. Black community leaders had spent much of the day and night trying to convince city and state officials to withdraw the State Police and National Guard, who had embarked on a campaign of destructive retribution against Newark’s Black communities.

After being summoned by his mother shortly after 11:00 P.M., 12-year-old Michael went upstairs and took the garbage from the kitchen out the door to the back porch. As Michael brought the garbage around to the front of the building, his brother and mother heard a shot.

“I went to the window to see where Michael was at,” Mrs. Pugh said. “I saw Michael lying on the ground and started yelling and screaming…Michael was lying directly under the light by the garbage cans in front of the building.”

“I went down to the sidewalk where my brother was lying next to our front steps in the dirt,” Andrew Pugh recalled. “The streets were clear of people. I picked up my brother Michael and brought him upstairs to our apartment and laid him on the bed.”

“Then I went to the window,” Andrew continued. “That’s when I saw the state police standing outside of their car on the opposite side of the street. I yelled at them to get an ambulance because my brother had been shot and they yelled back for me to bring him downstairs.”

The state police, according to Andrew Pugh, stayed on the other side of the street and waited until he and his friend put Michael in the car. The troopers brought 12-year-old Michael Pugh to Martland Medical Center where he was pronounced dead at 12:50 A.M.

According to the presentment of the Essex County Grand Jury, “Some friends had testified that they believed the shot had come from National Guardsmen stationed at the intersection of Bergen Street and 15th Avenue about a block away.” According to investigation of journalist Ron Porambo, “a boy with [Pugh] had called the guardsmen names and they opened fire.”

Michael Pugh was dead at the age of 12 after having been shot by National Guardsmen in front of his family’s apartment as he took out the garbage. “In the bright light,” his mother said, “Michael could not have been taken for a man or a looter.”

The Essex County Grand Jury found “no cause for indictment” of any National Guardsmen. 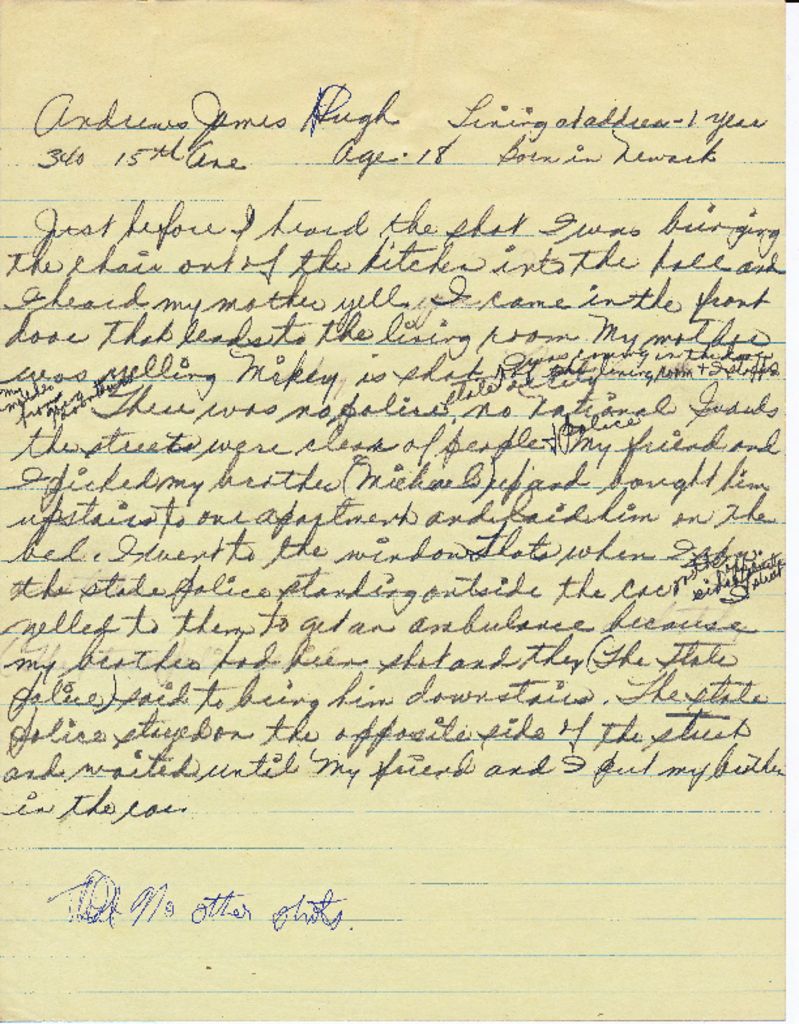 Witness statement of Andrew James Pugh given to Newark Legal Services Project, in which he describes the fatal shooting of his brother, Michael Pugh. — Credit: Junius Williams Collection 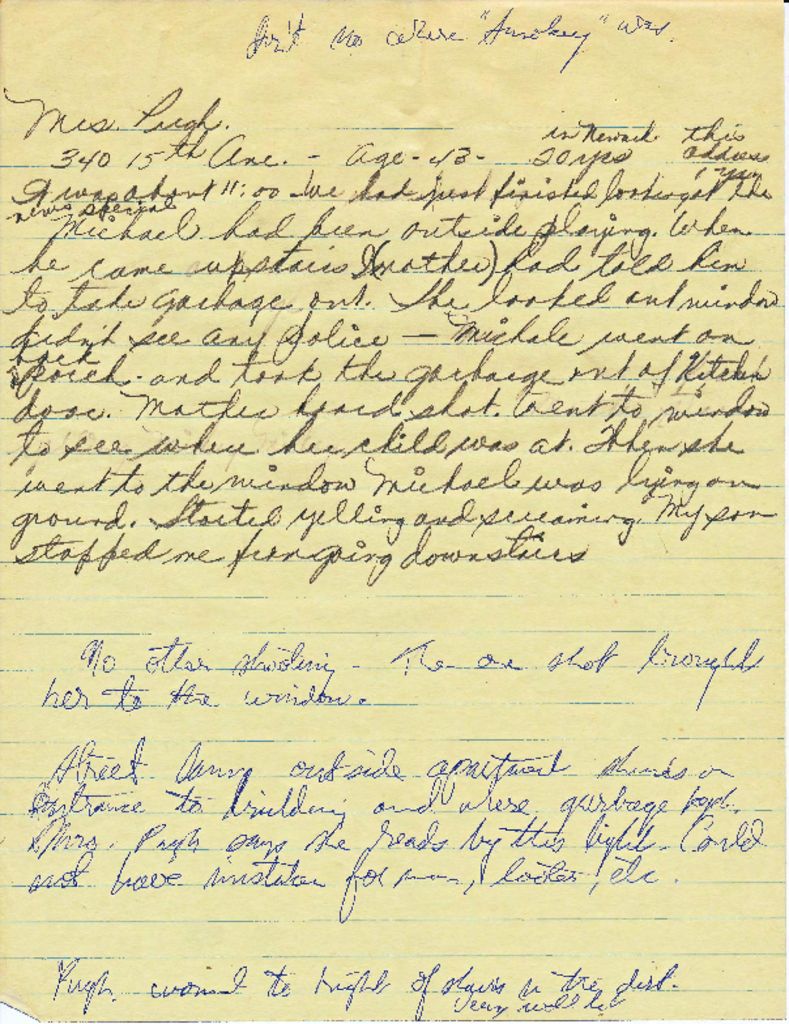 Flyer distributed to encourage community members to protest the seizure of land for the construction of a medical school in the Central Ward. — Credit: Junius Williams Collection 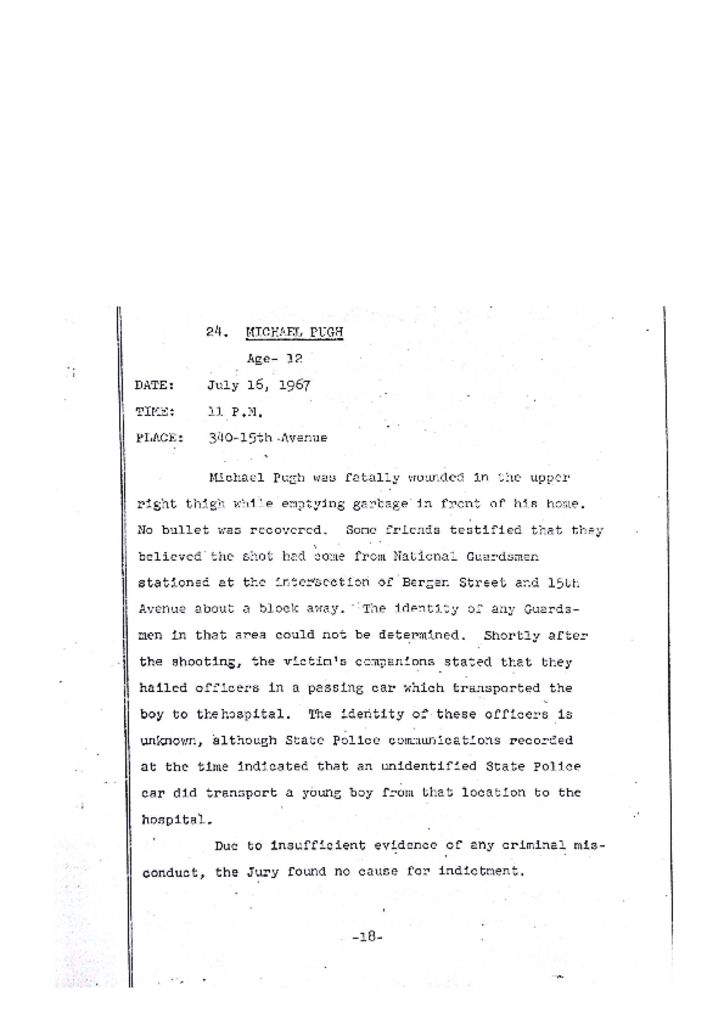 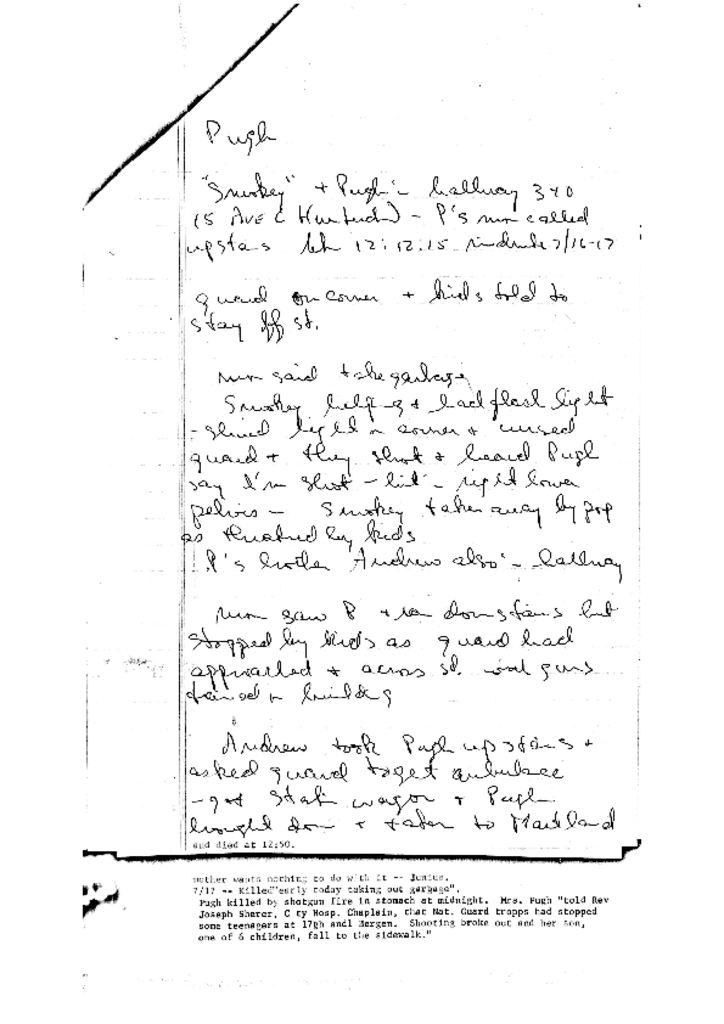