In 1962, when former Congressman Hugh J. Addonizio became Mayor of Newark, residents were promised “A Man For All the People.” Unlike his predecessor, Mayor Leo P. Carlin, Addonizio played on the Italians’ disdain for Irish domination in city politics and promised Newark’s Black community improvement on social issues such as education, housing, and crime. However, just four years later in 1966, a Black engineer named Kenneth Gibson entered the mayoral race just six weeks before the election, and with his 3rd place finish, signaled to the city that the balance of power in City Hall was shifting. In another four years, Gibson would become the first Black mayor of the city of Newark.

As exciting as it was for Mayor Gibson to take his seat at the table, to which only white men had previously been invited, the reality was that it was a broken table held up by widespread corruption and inefficiency as a result of the prior administration. Furthermore, Mayor Addonizio was rumored to have had a significant gambling habit and indebtedness to the mob. By 1970, both Blacks and whites had become so distrustful of city government that they used either their vote or silence at the polls, respectively, to voice their sentiment. So how did the Addonizio administration lead to this historic changing of the guard?

Five years into Addonizio’s administration, the 1967 Rebellion marked a major turning point in Newark politics. In his book Inside Newark, civil rights veteran and historian Robert Curvin noted that “most minority residents of Newark chose to label the 1967 episode a rebellion” as opposed to a “riot.” The people saw that the city’s political, economic, and social institutions had failed them and thus needed immediate and drastic improvement. As a result of his support for urban renewal projects that devastated Newark’s Black communities, scholar Fred Barbaro wrote, Addonizio “was accused [by Blacks] of deliberately clearing out large areas of Central Ward and leaving the land vacant which resulted in a loss of one fifth of the registered voters” between 1966-1968. Such land use issues led to the opposition of the Medical School expansion plan and the community fight against the proposed plan to construct the Route 75 highway through the Central Ward.

City governance was further brought into question during the mayoral campaign in 1969, when Gibson highlighted the City Council’s approval of the “transfer of ownership and control over Newark’s water supply to a recently-created autonomous “Water Authority.” Gibson warned that the citizens of Newark would no longer have direct control over the water supply, which had quickly grossed $8 million in revenues. Additionally, the treatment of Blacks by the police was also a critical issue in the campaign. During Addonizio’s administration, the Congress of Racial Equality (CORE) had led the charge for a police review board in response to frequent cases of police brutality, including the police killing of Lester Long in 1965. This demand was routinely rejected by Addonizio, and was a major factor behind the outbreak of the 1967 Rebellion. The year after the Rebellion, North Ward vigilante Anthony Imperiale was elected to City Council in a special election riding the wave of white backlash in the City. Imperiale quickly sought to expand police powers and convinced the city council to approve the purchase of police dogs. For many Black Newarkers, Imperiale’s calls for police dogs brought to mind the vicious use of German shepherds against Civil Rights activists in the South. Fortunately, for fear of future uprisings, the council later reversed this decision, despite support from some black politicians like Earl Harris.

A more official assessment of the Addonizio administration came in August of 1967, when Governor Richard Hughes announced the formation of the Governor’s Select Commission on Civil Disorder. “Their efforts resulted in a two-hundred page document titled Report for Action,” which Curvin described as “one of the most complete documents ever produced to investigate civil disorders at the state level.” The report’s documentation of the Addonizio administration’s wrongdoings prompted local newspapers to begin publishing stories that got the attention of both residents and city administration, which struggled to stay a step ahead of the scandals. As a result of these allegations, the county prosecutor impaneled a special grand jury, which eventually indicted Police Director Dominick Spina for allowing gambling houses to operate in the city. These investigations into the Mayor’s office and City Council were eventually turned over to federal authorities to “better protect witnesses.”

In 1969, Kenneth Gibson asked U.S. Attorney General Ramsey Clark to remove Police Director Dominick A. Spina from office. He further asked the Federal Task Force investigating the administration to “remain insulated as much as possible from the law enforcement officials of Newark,” thus reinforcing the belief that corruption was pervasive and entrenched within the city government. When the dust eventually settled, it was clear that the corruption of the Addonizio administration was more appalling to federal officials than the killing of Newark residents by law enforcement during the Rebellion. While no indictments for those responsible for the killings during the Rebellion would surface, indictments did come against alleged members of the mafia like Richie “The Boot” Boiardo, high-ranking Internal Revenue Services (IRS) officials and employees, and finally Mayor Hugh Addonizio, himself, for extortion.

This climate of corruption helped to propel Gibson’s campaign against Addonizio in 1970. Prior to his election, in a speech to a crowd of 200 students at Essex County College, Gibson declared that “people were the problem and not the structure” of government. Therefore, he promised to “shake things up” once elected as Mayor. In addition to the corruption and other questionable practices that characterized the Addonizio administration, many city jobs were handed out as political patronage. Rampant corruption notwithstanding, more Blacks were employed at city hall than in all other previous administrations. Addonizio had staffed various departments with loyal supporters during his administration and given them little direction, so upon assuming the office in 1970, Mayor Gibson was confronted with a large staff of entrenched and ineffective civil servants, largely loyal to Addonizio. As one observer noted at the dawn of the Gibson administration, “the years of neglect had taken their toll in a city considered to be among the most seriously troubled cities in the nation.”

The expectation of political patronage that characterized Newark politics continued into Mayor Gibson’s administration. Expecting jobs for constituents as repayment for their support of Gibson’s election, many councilmen opposed many of Gibson’s policies when it seemed that he was less than enthusiastic to comply with expected past practice of job allocation. Although the election of Kenneth Gibson provided a new face for city government, old policies and practices were hard to change. 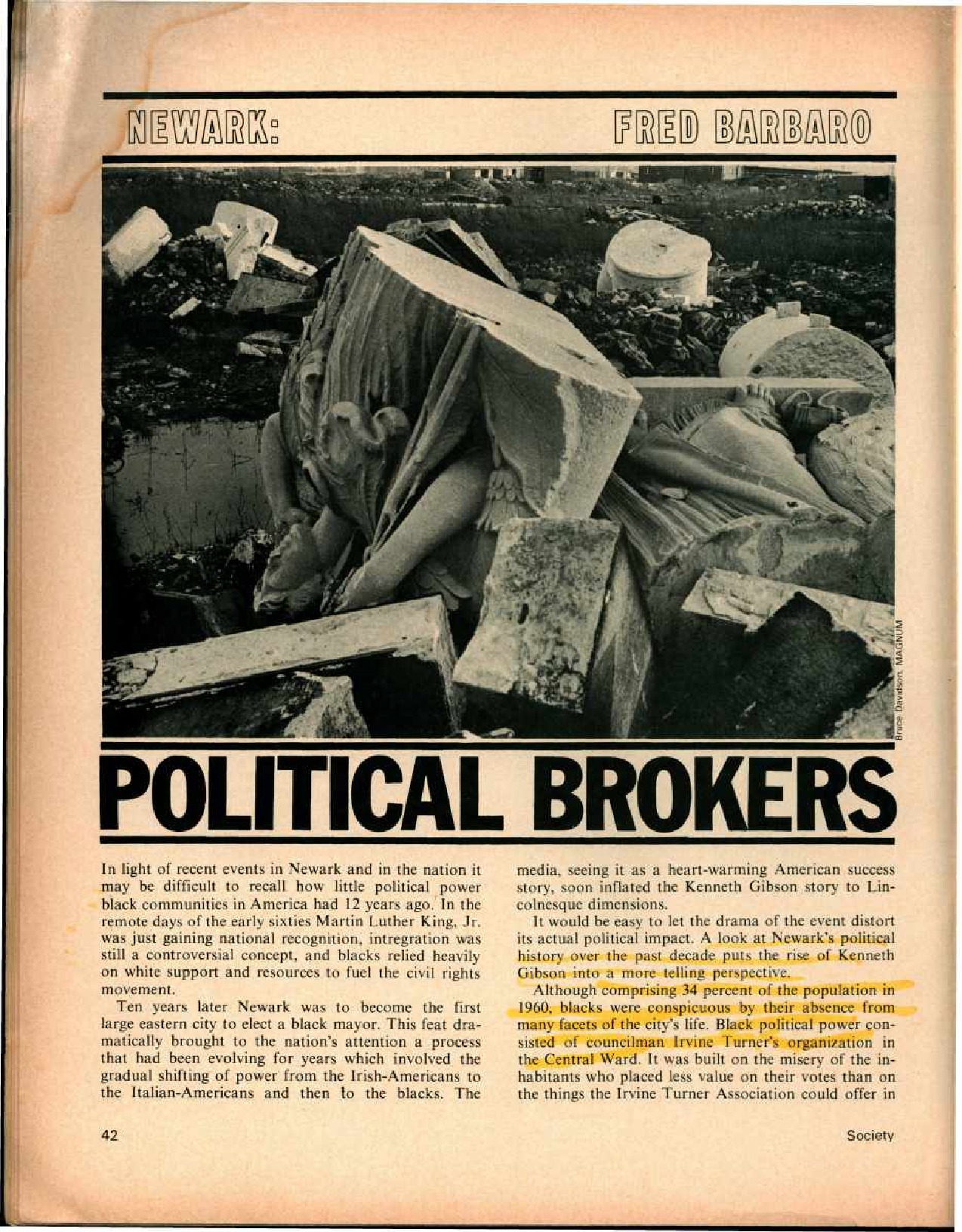 An article from the September/October 1972 edition of Society magazine by Fred Barbaro offering a political history of Newark from the 1950s-early 1970s. –Credit: Junius Williams Collection 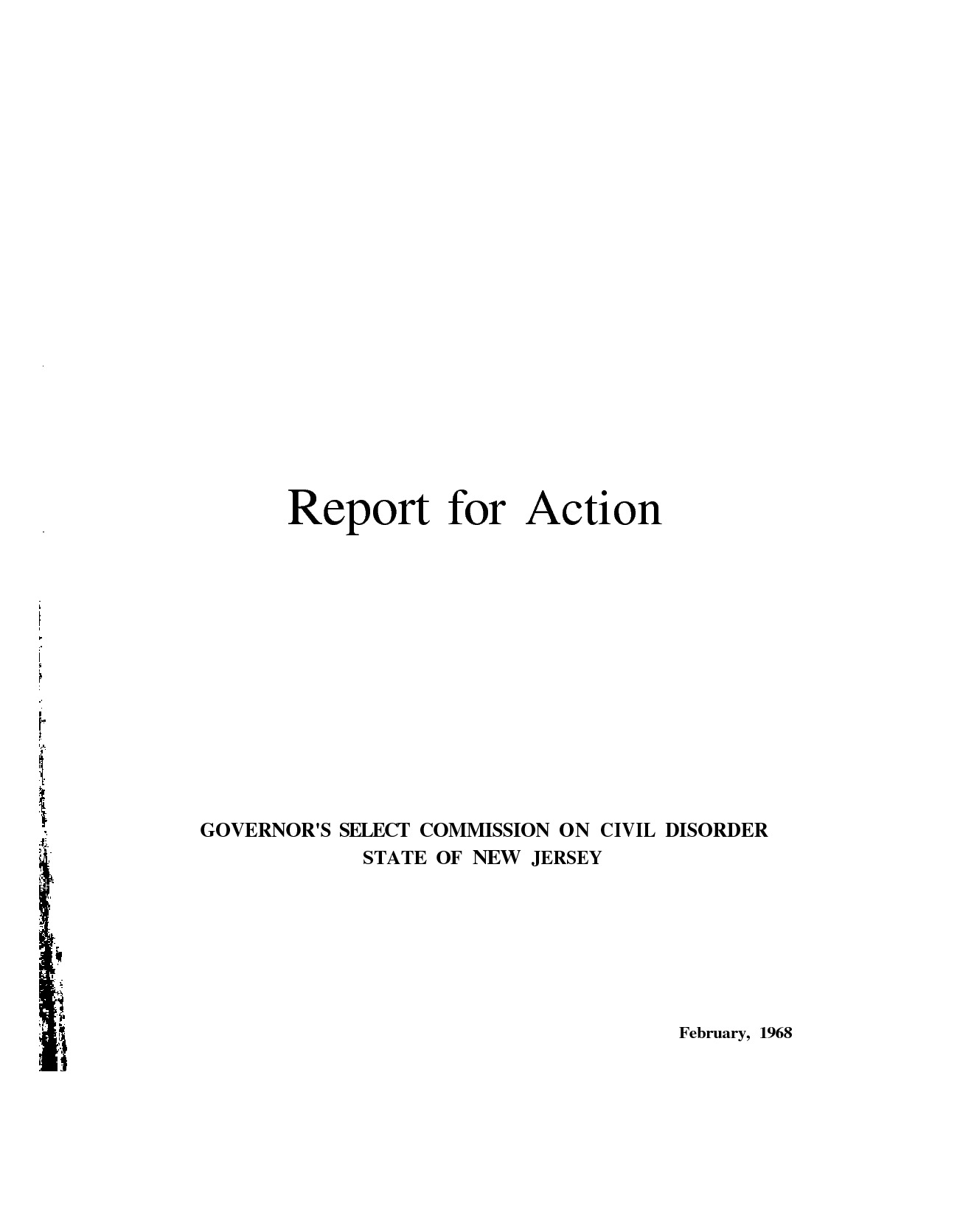 “Report for Action,” the report of the Governor’s Select Commission on Civil Disorder, offering analyses and recommendations on the causes of the 1967 Newark Rebellion. –Credit: Newark Public Library

News footage of the 1970 mayoral campaign in Newark, featuring coverage of the criminal charges against incumbent Newark Mayor Hugh J. Addonizio. –Credit: Newark in the News/The Estate of Robert Curvin

A special edition of Due Process covering the 45th anniversary of the corruption trial of Newark Mayor Hugh Addonizio, August 29, 2015. –Credit: Due Process TV