On Friday afternoon, July 14th, Cornelius Murray, Jr. was walking up Jones Street toward Springfield Avenue when he ran into his friends, Jesse Koon and Morris Marsette. Just before they spotted Murray, Koon and Marsette noticed two Newark Police officers with guns in the window of a building on the street.

About fifteen minutes earlier, Newark police detective Frederick Toto had been fatally shot outside of the Scudder Homes project after law enforcement exchanged fire with alleged “snipers” in the apartments. Toto’s shooting occurred shortly after police had opened fire on innocent people gathered in front of the project, killing Isaac Harrison and Robert Lee Martin. It remains uncertain if Detective Toto was struck by fire from someone inside the project, or by erratic shooting from National Guardsmen or State Police.

The scene outside the nearby Scudder Homes provided the backdrop for what was about to take place on Jones Street. As journalist Ron Porambo later wrote, “Immediately after Toto was hit in front of the projects three men were murdered by the Newark police in cold blood.”

As Murray was approaching Koon and Marsette, the two officers perched in the window across the street ordered the group to disperse. Although initially slow to get moving, the group started making their way towards their cars parked up the street when the police opened fire.

According to Marsette, “Someone said, ‘I think they’re shooting blanks.’ Then I heard two bullets crash into Donald Holleg’s car, then somebody shouted “those ain’t blanks, those are real bullets.” Now under fire, the group of ten men took cover behind parked cars as Marsette, Koon, and Cornelius Murray tried to make their way to Marsette’s car. As Murray emerged from behind a parked car and made his move to reach Marsette’s, he was struck by a policeman’s bullet. According to Marsette, who was lying prone between the two cars, “I saw Cornelius being flipped over with the impact of the bullet. He was running toward 14th Avenue when he was hit, and I saw blood streaming down the left side of his back…he came to rest near a lamp post on the sidewalk.”

Cornelius Murray, Jr. was dead at the age of 29 after having been shot in the back by Newark Police officers while obeying lawful orders. Mrs. Geneva Murray, Cornelius’ widow, later said, “Finally, I found out on the third day. A woman told me, ‘Mrs. Murray, I feel so sorry for you. I could get fired for telling you this but your husband was dead three days ago.” 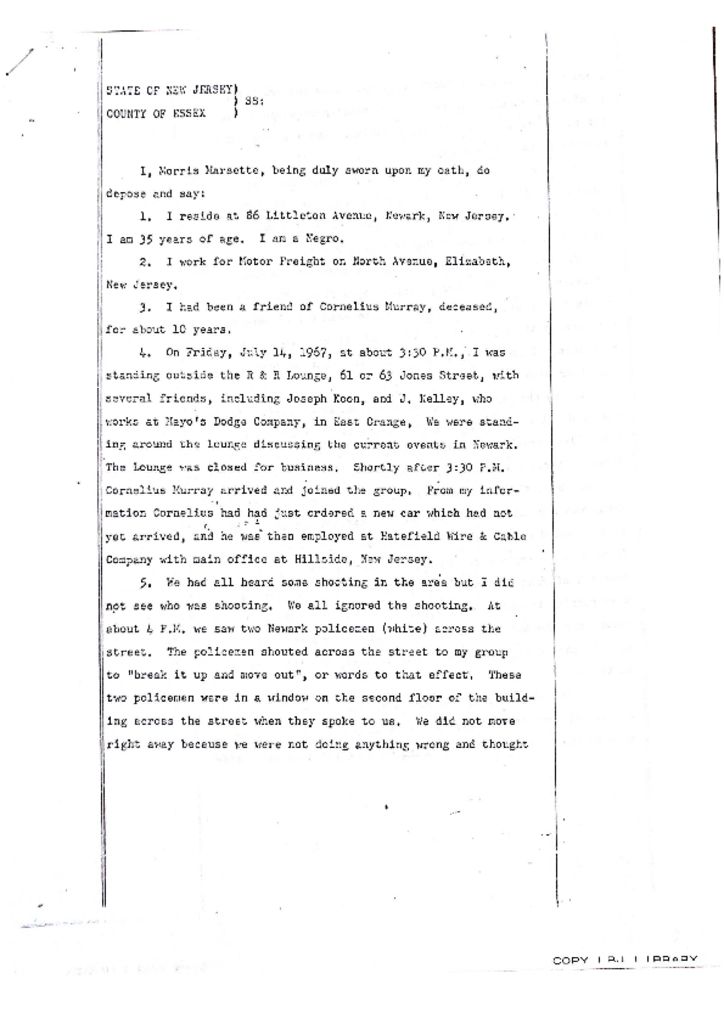 Deposition of Morris Marsette, in which he describes police opening fire outside of the R&R Lounge on Jones Street. — Credit: Newark Public Library 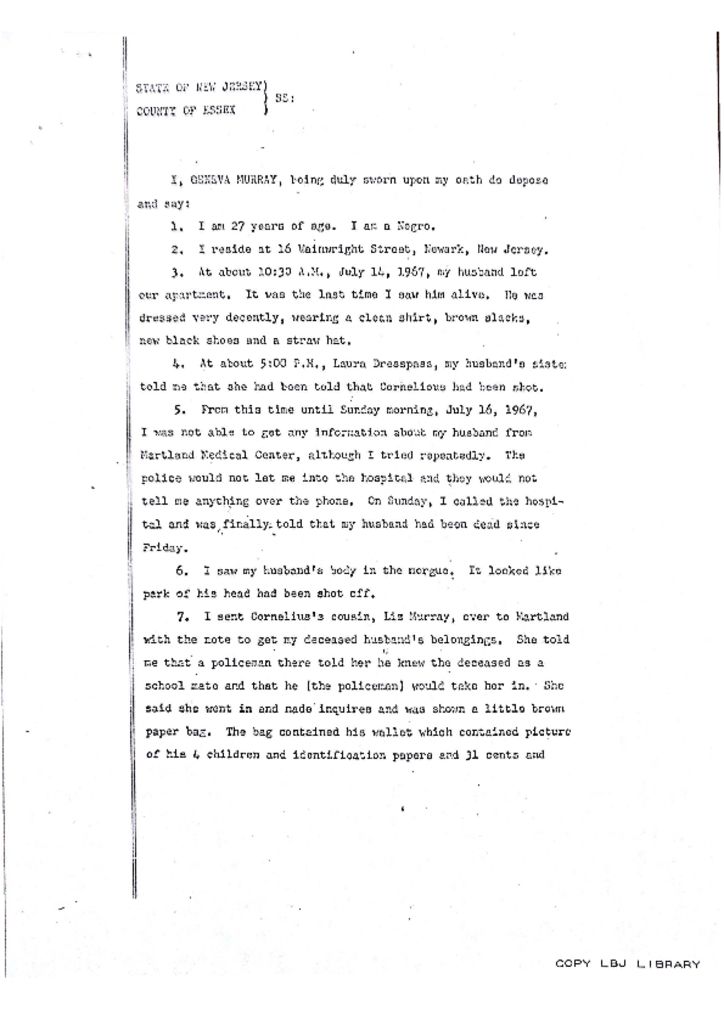 Deposition of 27-year-old Geneva Murray, wife of Cornelius Murray, Jr., in which she describes learning of her husband’s death, seeing his body in the morgue, and his personal effects going missing. — Credit: Newark Public Library 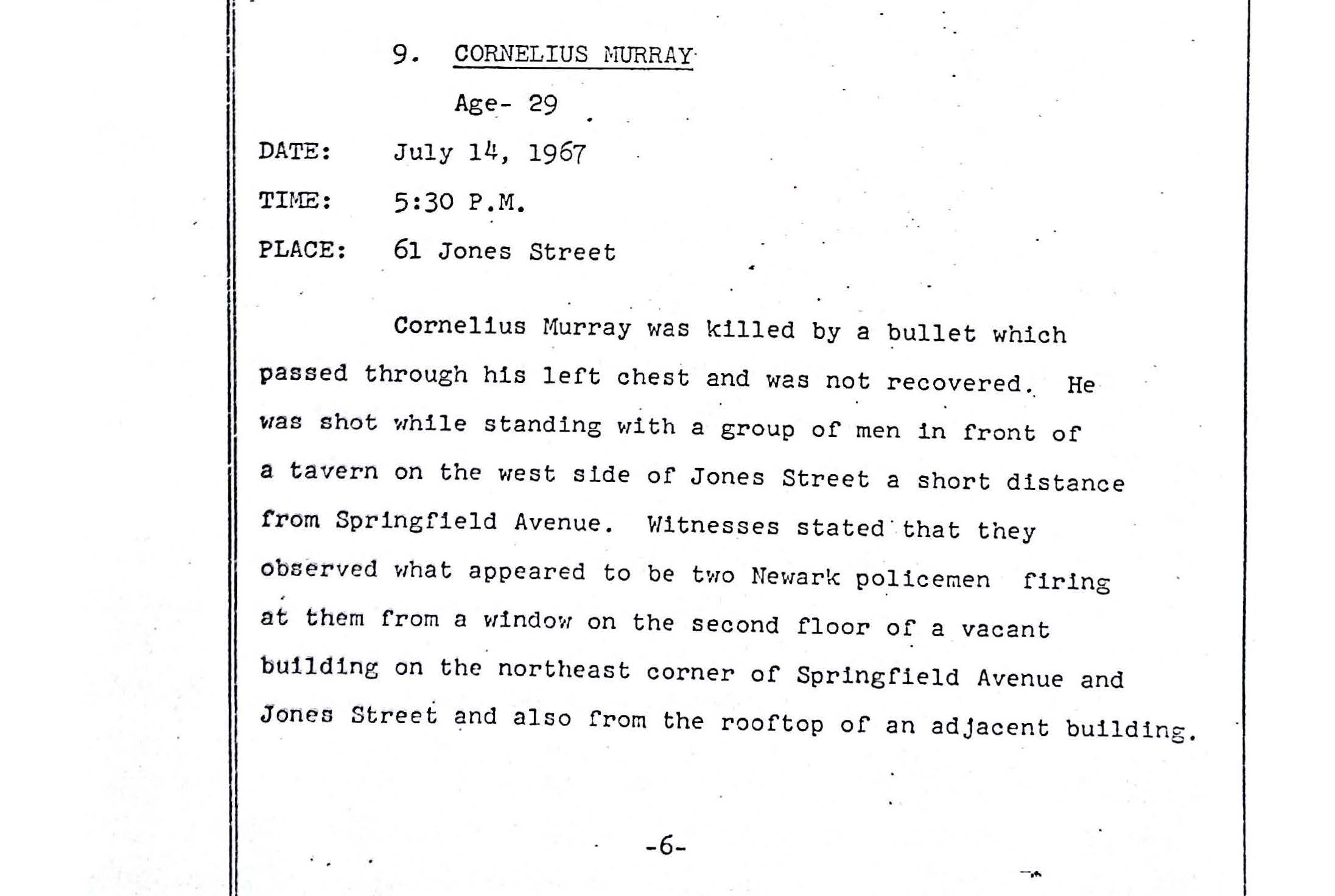 Grand Jury Report describing the fatal shooting of Cornelius Murray, which “occurred within about 15 minutes after the shooting of Detective Frederick Toto a few blocks away.” The Grand Jury found “no cause for indictment.” — Credit: Newark Public Library 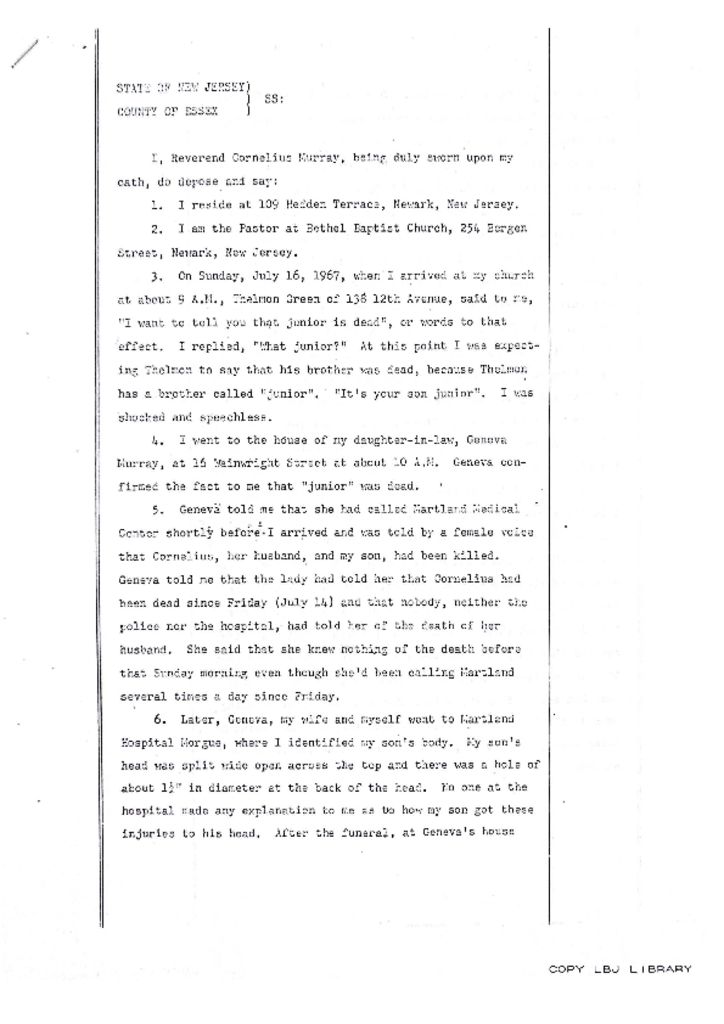 Deposition of Reverend Cornelius Murray, father of Cornelius Murray Jr, before the Essex County Grand Jury, in which he describes learning of his son’s killing and his visit to the morgue. Rev. Murray states that he was told of Cornelius being shot in the back, but found in the morgue with his head split open. — Credit: Newark Public Library 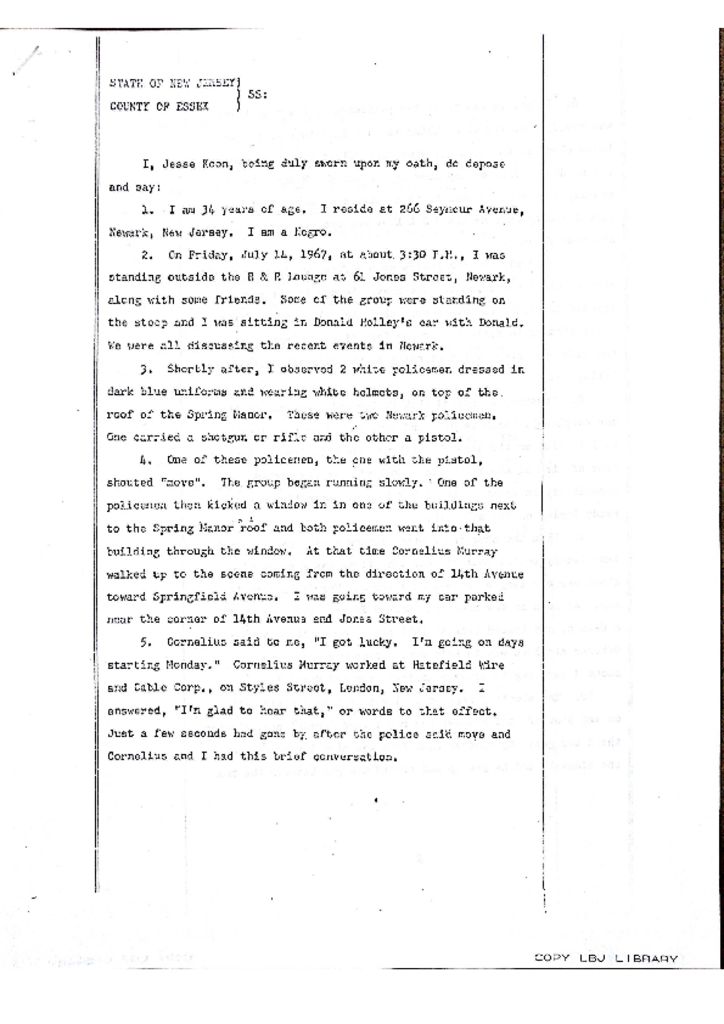 Deposition of 34-year-old Jesse Koon before the Essex County Grand Jury, in which he describes two police officers opening fire upon bystanders outside of the R&R Lounge on Jones Street. — Credit: Newark Public Library