Once the new Mayor-Council government was announced, and boundaries drawn for the 5 new wards, the first election was set for May 1954.

The reform-minded middle class and professional African American communities contained many of the elite in the community. They formed the Ad Hoc Voters Independent Council to advance their candidate, Roger Yancy, a Central Ward lawyer, former Asst. Corporation Counsel for the city, and former Asst. US Attorney, as the community preference.

But there were others in the African American community who promoted a different set of interests. Irvine I. Turner was a real estate broker and former newspaperman, popular in the community and with some political experience. He had run unsuccessfully for Commissioner in 1949 and had a strong coalition of supporters around him who knew the streets of Newark, and how to get out the black vote.

Irvine I. Turner was a real estate broker and former newspaperman, popular in the community and with some political experience.

Turner also had the financial backing of the Jewish crime syndicate associated with Longie Zwillman who controlled rackets in the old Third Ward, although he was not a Zwillman protégé. In addition, he received money from Mayor Ralph Villani, the incumbent Italian politician who “didn’t want to see Leo Carlin (the Irishman) as Mayor,” in this first mayoral competition to be decided by the people.

Turner had the support of members of the Negro Labor Vanguard and the Civil Rights Congress, activists whose politics were decidedly left wing, notably, the savvy organizer Larry Coggins; he had union supporters, such as Hank Harris from the local branch of the CIO; college educated writers and strategists (J. Harry Smith, Harry Wheeler and Phil Thigpen); both the old Third Ward chairpersons of the Democratic Party (Charles Matthews and Larrie Stalks), and Republican party (Bill Stubbs). Turner also had an interesting collection of old Third Ward working class people who knew their way around the bars, churches, social organizations, and street corners (Tim Still, Virginia Jones, Jenny Lemon; Johnny Barnes, Morris Parker), and who were not intimidated by the presence of the Italian challenger, Johnny Savado, from the Old Fifth Ward, whose territory had been merged into the new Central Ward. Jack Hicks, Honey Ward and their associates were Turner’s muscle men, whose services as “enforcers” were eventually quite often necessary against the equally tough Savado supporters.

They were organized as the Voters Independent Council. At a meeting called by the reformers to push the candidacy of Yancy, they took over the meeting, and sent the unaccustomed middle class reformers out of their own meeting.

In the three-way contest, Irvine Turner won to become the first elected official on the City Council in Newark. He beat his nearest competitor, Johnny Savado, by a 2 to 1 margin. Roger Yancy came in third. This was an enormous victory not only for African Americans, but also for the working class of the Old Third ward. 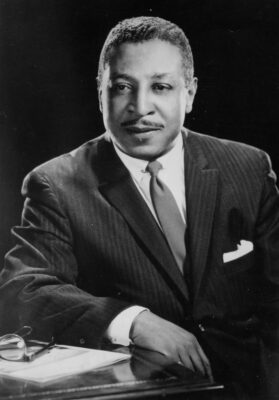 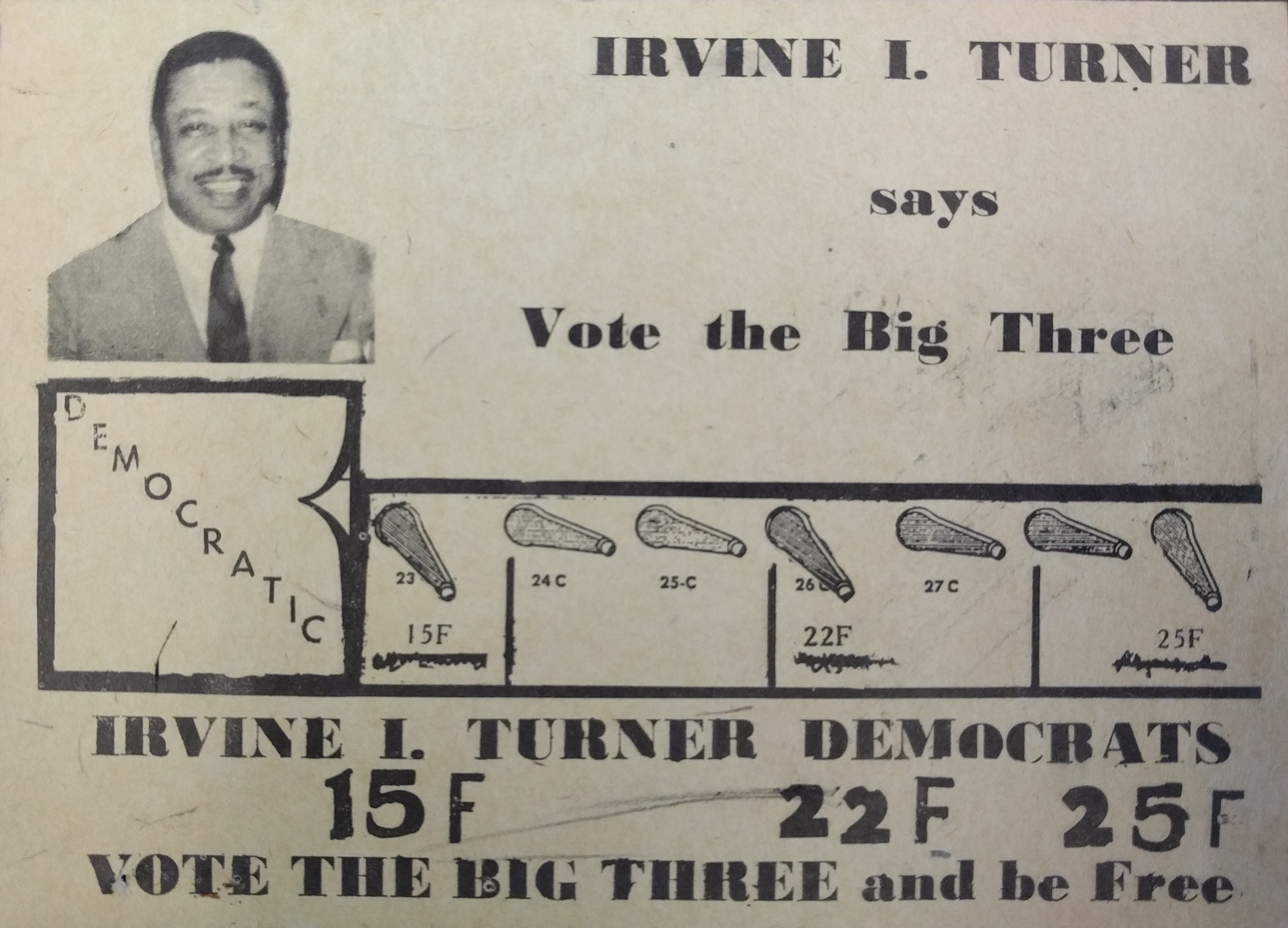 Did Turner meet the Expectations of the People?

“As an aspiring, ambitious politician, Turner could be militant; measured by his rhetoric, he was Newark’s first Black Power leader…When the League of Women Voters held a debate of Central Ward candidates, Turner used the forum to call for a black police chief and a black mayor, while other candidates emphasized the need for improved services and better race relations.” -Robert Curvin 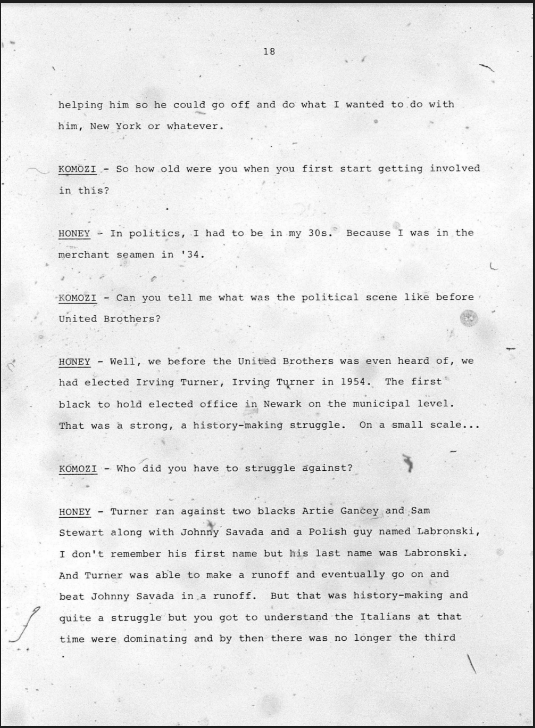 Transcript of an interview with Eulis “Honey” Ward conducted by Komozi Woodard, in which Ward describes the election of Irvine Turner to Central Ward councilman in 1954. — Credit: Black Studies Research Sources, The Black Power Movement, Part 1 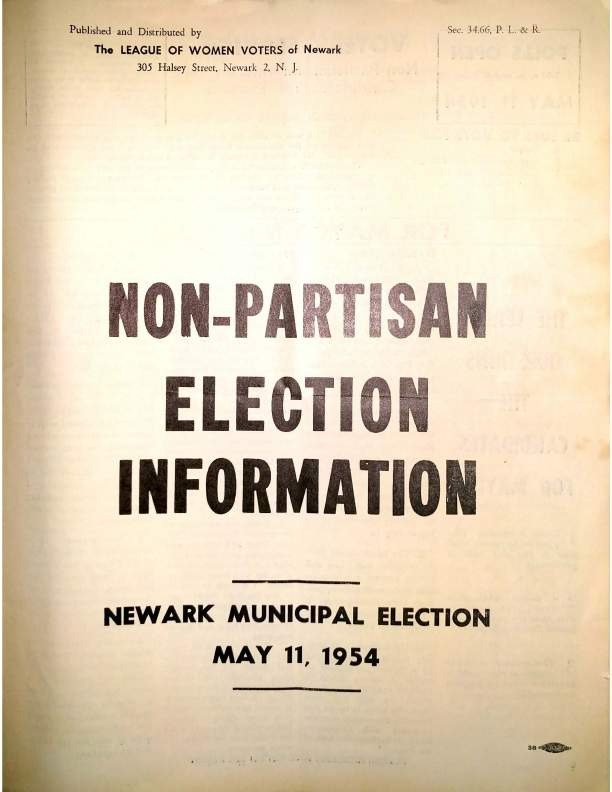 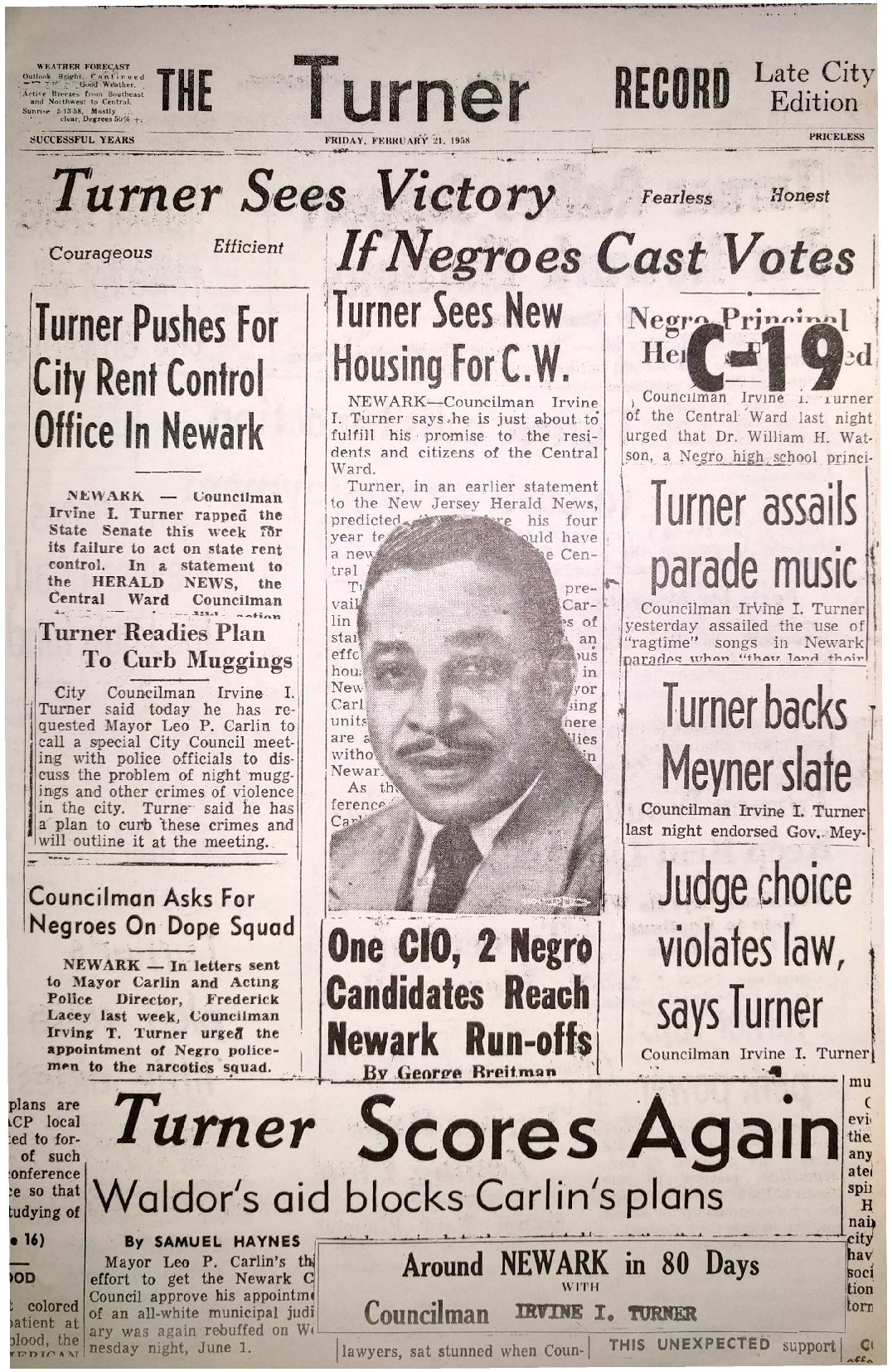 Campaign pamphlet distributed during Irvine I. Turner’s successful 1958 campaign for City Council in the Central Ward. Turner was the incumbent in the race, after becoming Newark’s first African-American City Councilman in 1954. — Credit: Newark Public Library