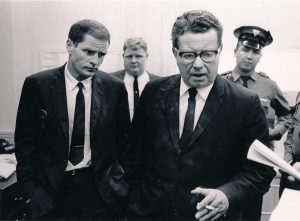 New Jersey Governor Richard Hughes (right) speaks with a reporter after touring the “riot area” of Newark’s Central Ward on July 14, 1967. Hughes was called into the city by Mayor Hugh Addonizio after violence broke out for the second straight night. Earlier that morning Hughes called in the State Police and National Guard to quell the rebellion. –Credit: The Star-Ledger