“We ain’t riotin’ agains’ all you whites. We’re riotin’ agains’ police brutality, like that cab driver they beat up the other night. That stuff goes on all the time. When the police treat us like people ‘stead of treatin’ us like animals, then the riots will stop.”

Billy Furr spoke these words to LIFE Magazine reporter Dale Wittner the morning of July 15th when they first met on Avon Avenue. The 24-year-old Furr had come to Newark to pick up an unemployment check and look for a new job, but found himself stranded when the bus lines back to Montclair were shut down due to the rebellion.

When Wittner and photographer Bud Lee ran into Furr again a couple hours later, Furr handed Wittner a beer from the stock he had just acquired from Mack Liquors, saying, “…if the cops show up get rid of it and run like hell.” The three men parted ways again, as Wittner and Lee went down the block to check out the conditions in another man’s apartment. As Wittner and Lee walked out the door and back onto the sidewalk, a Newark Police car sped onto the block and skidded to a stop in front of the liquor store where Furr and friends were. “In an instant,” Wittner reflected, “the shotguns that bristled from the cruiser’s windows shattered the relative calm.”

What happened next is best continued in Wittner’s own words.

“…Billy was standing outside with part of a six-pack in his left hand. He’d been arrested before. This time he ran.

He raced past me down Avon. I was barely 30 feet away from a yellow-helmeted officer with a shotgun pointed toward my head. ‘Get down,’ he screamed. I fell hard on the sidewalk just as a blast from the weapon exploded over me and the officer shouted an order to halt. But apparently Billy kept running behind me. From the ground I looked up into the sweating face of the policeman as he squinted down the long barrel. I prayed he wouldn’t shoot. He pulled the trigger.

Tiny pieces of the spent shell fluttered down on me as blue uniform trousers of the Newark Police Department flashed past toward Billy lying on the ground.”

Billy Furr was dead at the age of 24 after having been, in a matter of seconds, accused, convicted, and sentenced to death by Newark Police officers for the crime of stealing beer. As witness Maggie Hawkins testified, “…I had never seen a man shot down like a dog or rabbit like that when he did not even attempt to fight back or defend himself.”

“A police car sped up and helmeted, shotgun-toting policemen jumped out. Bystanders (including Wittner, crouching at left of telephone pole) flattened themselves as Furr (in light-blue shirt) fled. Then the officer aimed at Furr, who can be seen still running.” — Credit: Bud Lee/LIFE Magazine 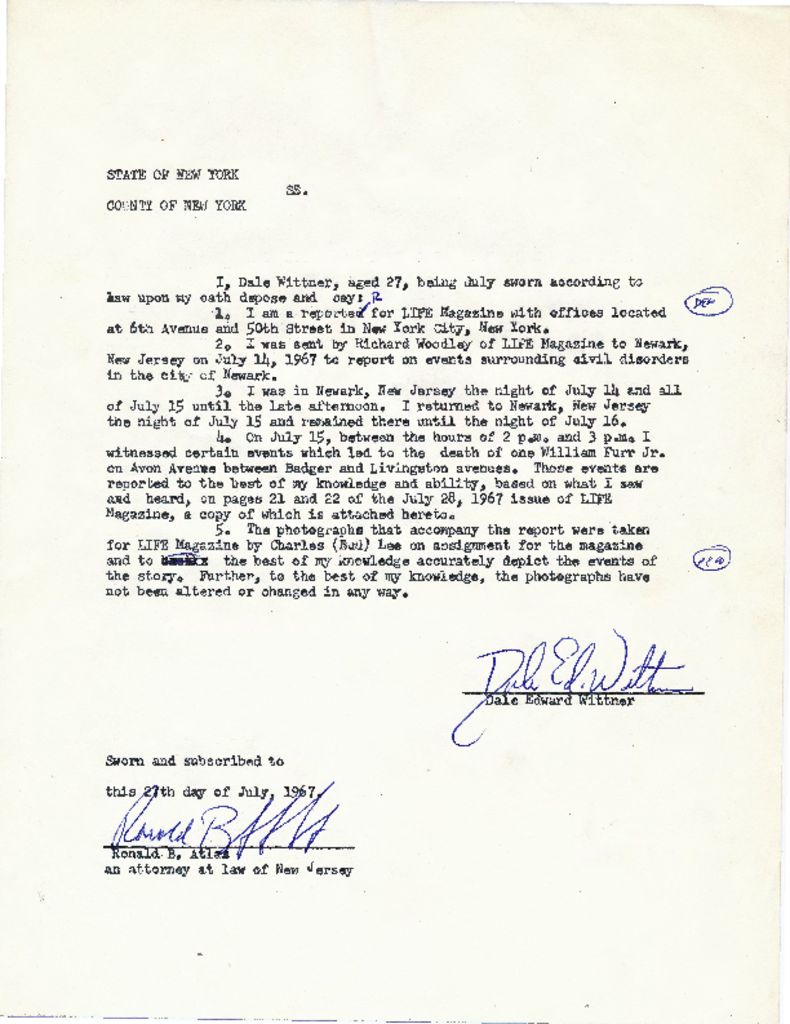 Deposition of Dale Wittner, reporter for LIFE Magazine, in which he testifies on the fatal shooting of William Furr. — Credit: Junius Williams Collection 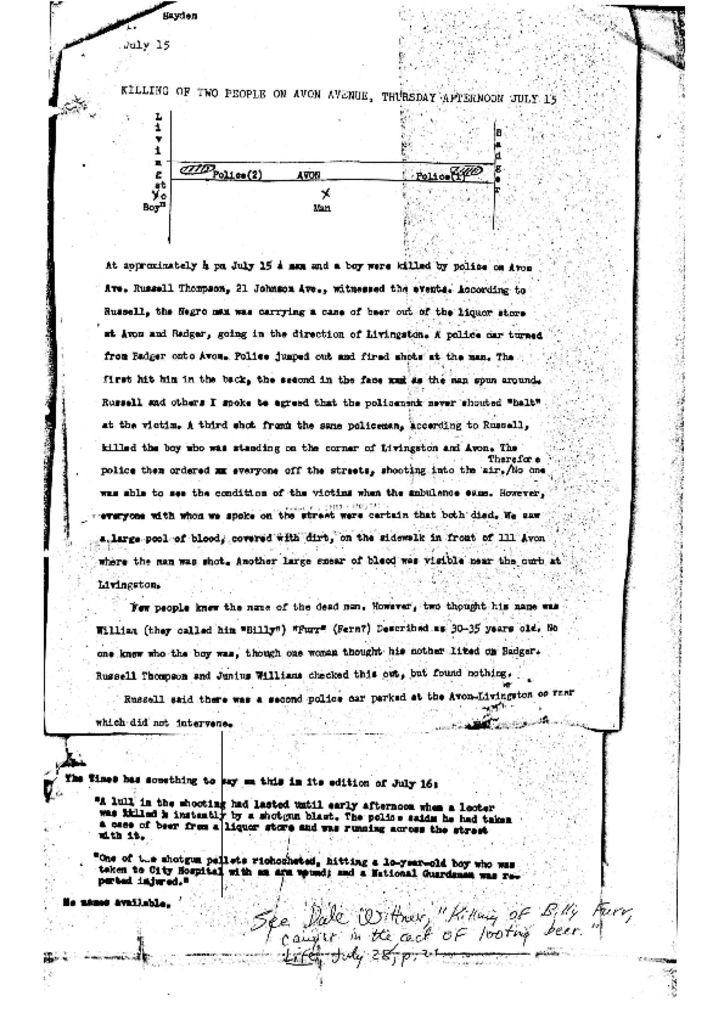 Report by Tom Hayden, titled “Killing of Two People on Avon Avenue, Thursday Afternoon July 15,” in which he reports on witness testimony of the fatal shooting of William Furr. The second victim that Hayden refers to is 12-year-old Joe Bass, who was rumored to be killed, but survived. — Credit: Junius Williams Collection 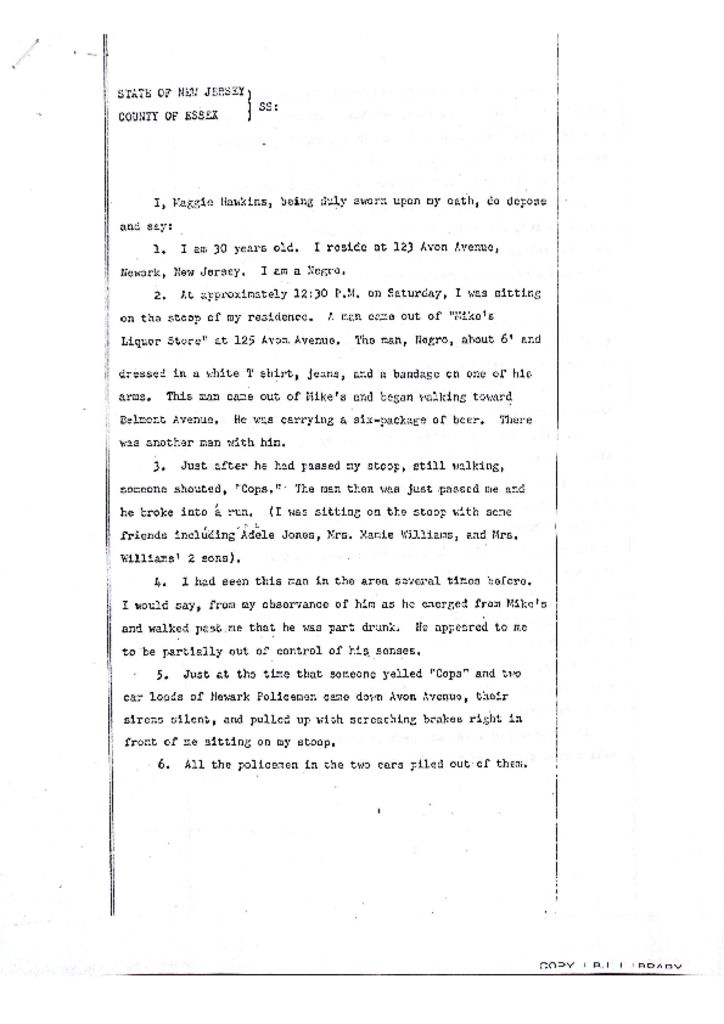 Deposition of Maggie Hawkins before the Essex County Grand Jury, in which she describes the fatal shooting of William Furr by Newark policemen on July 15, 1967, who Hawkins says was “shot down like a dog or rabbit.” — Credit: Newark Public Library 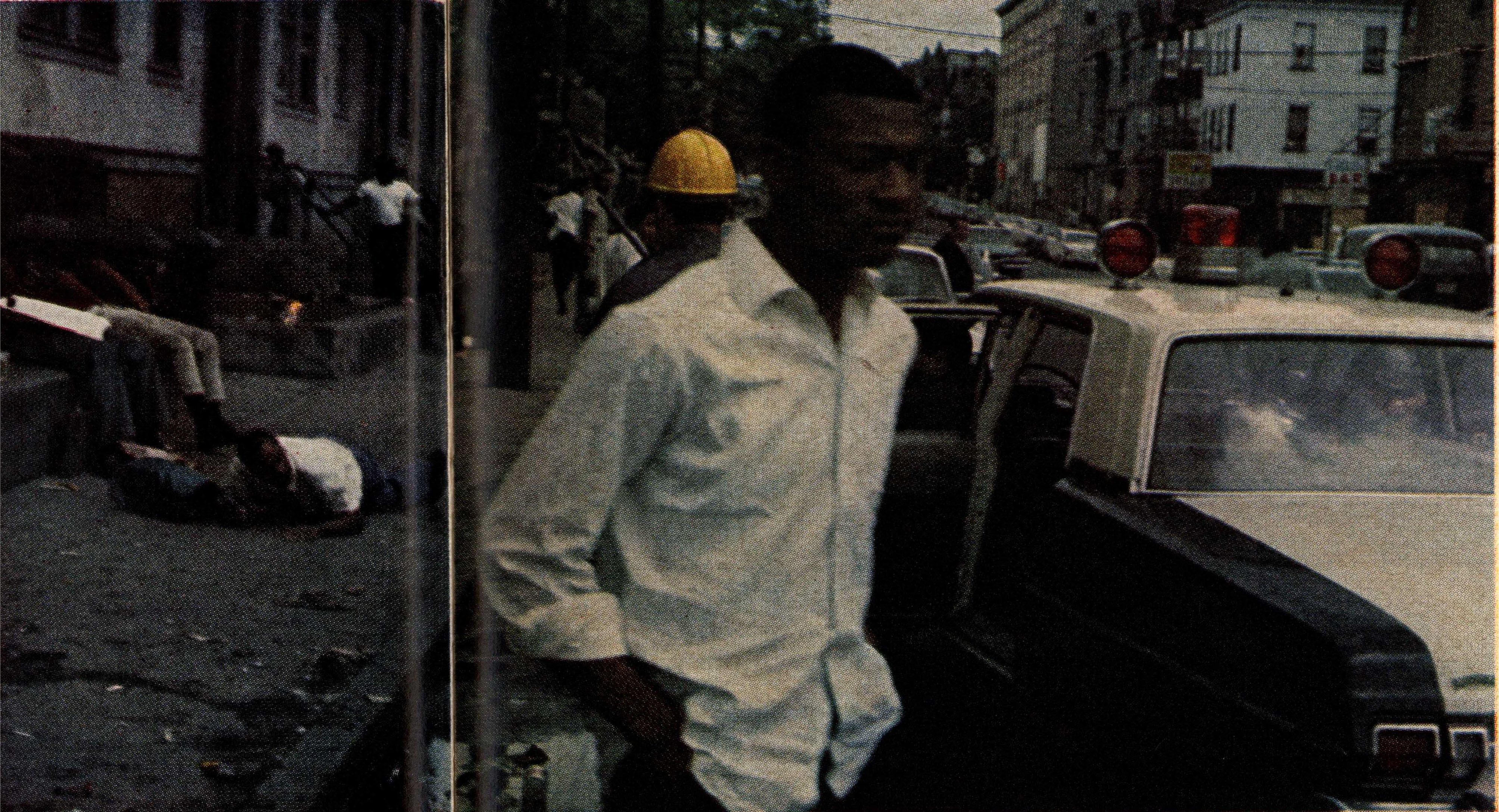 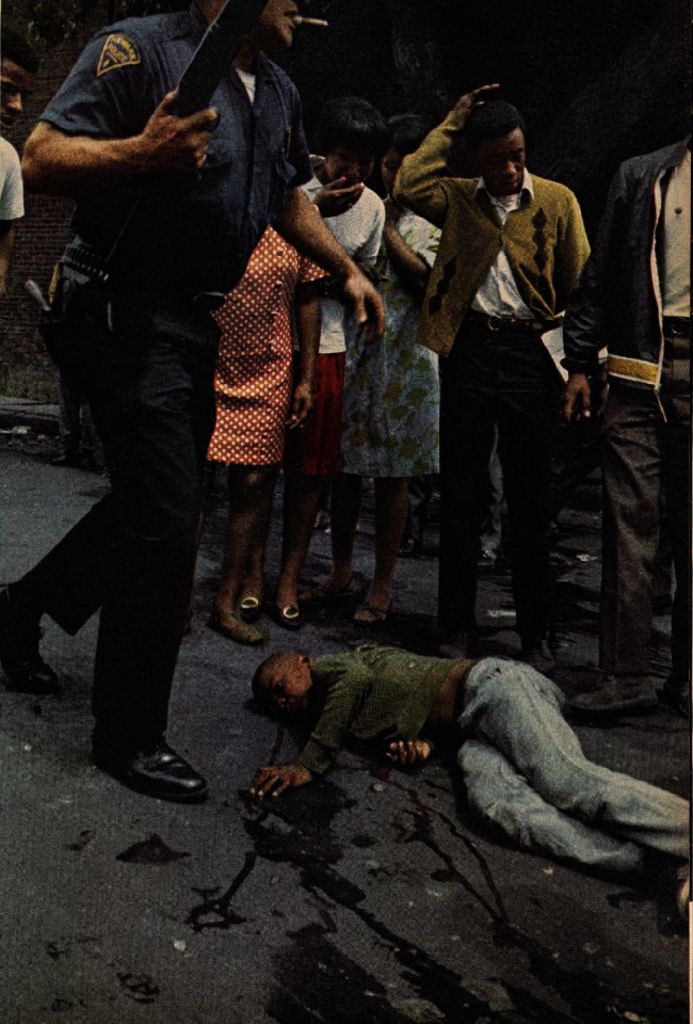 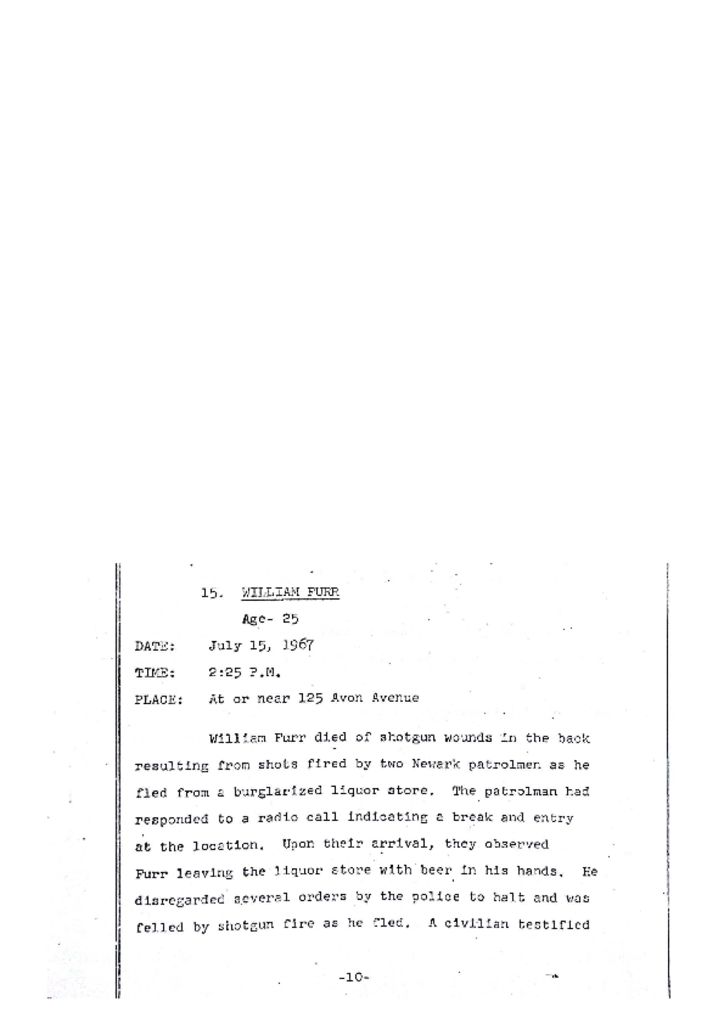 Grand Jury report describing the fatal shooting of 25-year-old William Furr on July 15, 1967, who “died of shotgun wounds in the back” after being shot by two Newark patrolmen after observing “Furr leaving the liquor store with beer in his hands.” The Grand Jury found “no cause for indictment.” — Credit: Newark Public Library