Eddie Moss was the oldest of Emerson and Louise Moss’s four sons. The family lived at 240 Livingston Street, where they were raising Eddie and his brothers, Clarence, Michael, and Jerry. On Friday, July 14th, the Moss family and Eddie’s uncle, Jimmy Cannon, piled into their 1957 yellow and black Chevrolet and left to get dinner at White Castle on Hawthorne Avenue around 8:00 P.M.

Early that morning, the State Police and National Guard had arrived in Newark to restore order after two nights of violent conflict between police and protestors had rocked the city. One of the first steps taken by the National Guard toward this end was the establishment of roadblocks to restrict travel in the city and contain the spread of “rioting.” It seems that the Moss’s were unaware of these travel restrictions, as Mrs. Moss reported being “frightened” by the sight of armed, uniformed men in the street on their way to White Castle.

According to Mr. Moss, “as I was driving on Hawthorne Avenue and approaching Belmont Avenue, I observed before me a yellow barricade. As I approached the barricade, I observed three or four National Guardsmen and began to brake my automobile. As the automobile slowed to a stop, the National Guardsmen began to shoot at the car without any prior warning and with absolutely no provocation.”

The Moss family tried their best to signal to the Guardsmen that they were not a threat. “I got out of the car and waved my hands frantically at the Guardsmen to try and get them to stop shooting,” Moss’s brother-in-law, Jimmy Cannon later testified. “They continued shooting, so I jumped back into the car and went through the roadblock and a second one.”

As Cannon got back in the car, Mr. Moss tried to get his family away from the gunfire to safety. According to Moss, “A gun went off and I mashed down on the gas. I thought they were trying to kill everyone in the car.” Fearing for the lives of his wife, brother-in-law, and four sons, Emerson Moss “drove around the barricade as bullets were striking my car.”

“Shortly thereafter,” Moss continued, “I approached another barricade, manned by the National Guard, and was again the object of unprovoked and indiscriminate shooting.” The 1957 Chevrolet carrying the Moss family now “picked up tremendous speed, going as fast as 120 miles per hour,” en route back to 240 Livingston Street.

Not until the family got back to the Moss’s house did they discover that 10-year-old Eddie had been shot. “As soon as we arrived home,” Emerson Moss stated, “my son, Clarence, age nine, said, ‘Eddie’s been shot.”

“I took the boy out of the car,” Jimmy Cannon recalled. “There was a huge hole in the back of his head and his brains were blasted all over the rear window and seat.”

Eddie Moss was dead at the age of 10 after having been shot through the back of the head while his family tried to escape the indiscriminate shooting of their car by National Guardsmen. Later that night, Jimmy Cannon was beaten by several Newark police when he refused to move from where he was standing at the corner of Rose and Livingston Streets. ‘This thing is wrong,’ Cannon said. ‘I’ve faced a lot of things, I was four years in the Marines. But this is bad, and I just don’t care anymore…Why should innocent people suffer? I’m not for violence…I’m just for rights.’

The Essex County Grand Jury found “no cause for indictment” of the National Guardsmen involved. 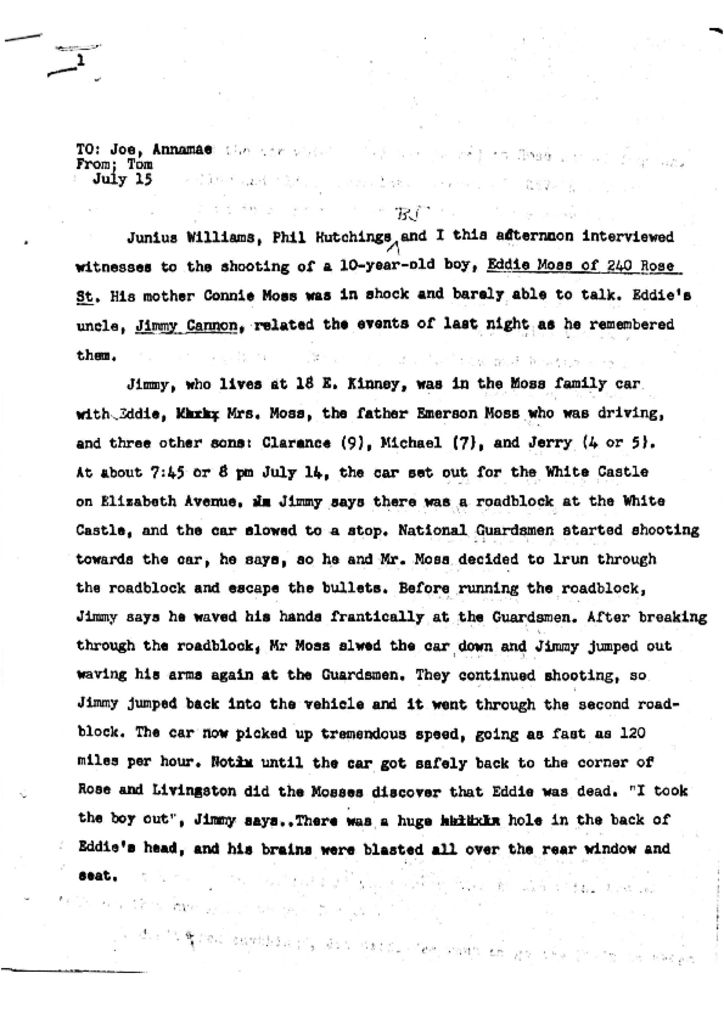 Notes of Tom Hayden on an interview with Jimmy Cannon, conducted by Junius Williams, Phil Hutchings, and Hayden on the fatal shooting of his nephew, Eddie Moss. — Credit: Junius Williams Collection 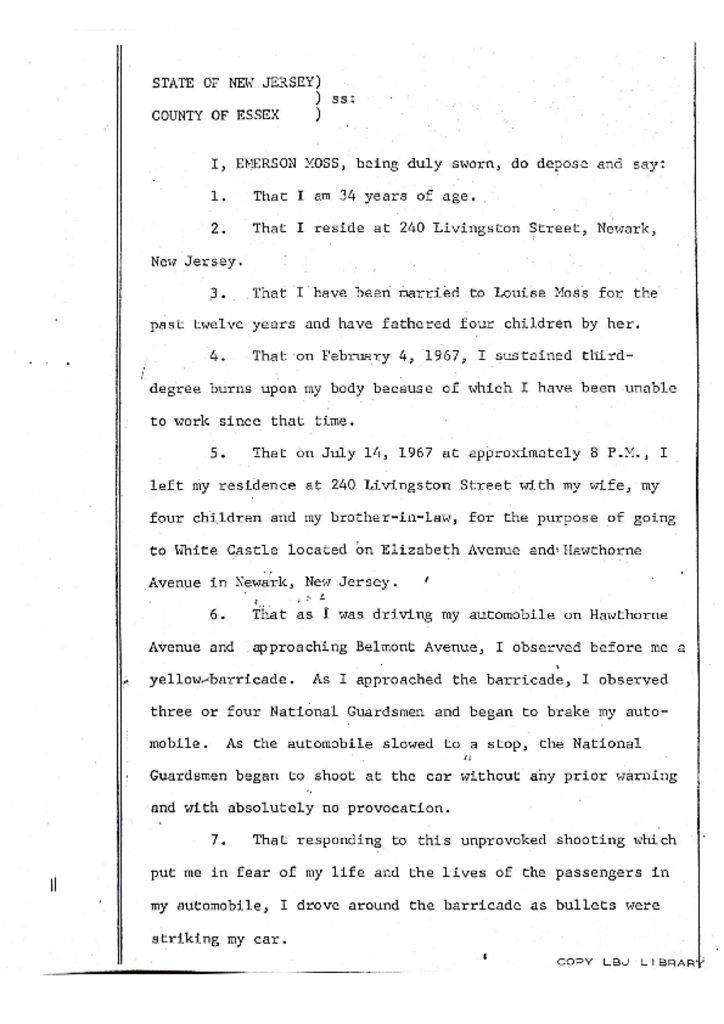 Deposition of Emerson Moss in which he describes the fatal shooting of his 10-year-old son, Eddie, by National Guardsmen. — Credit: Newark Public Library 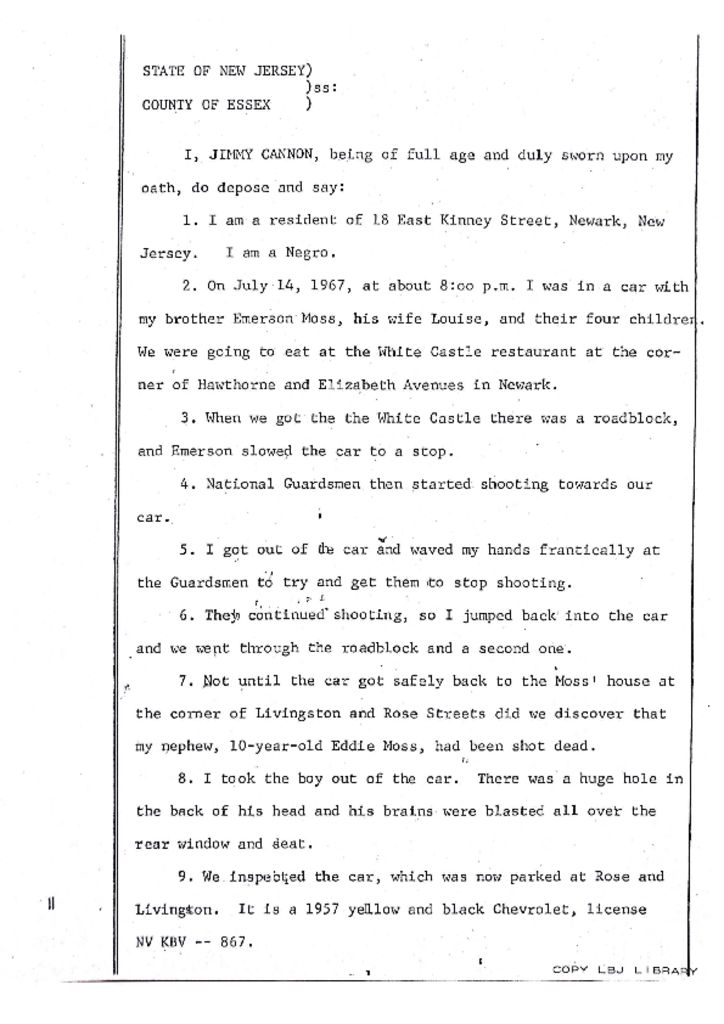 Deposition of Jimmy Cannon before the Essex County Grand Jury, in which he describes the fatal shooting of his nephew, Eddie Moss by National Guardsmen. — Credit: Newark Public Library 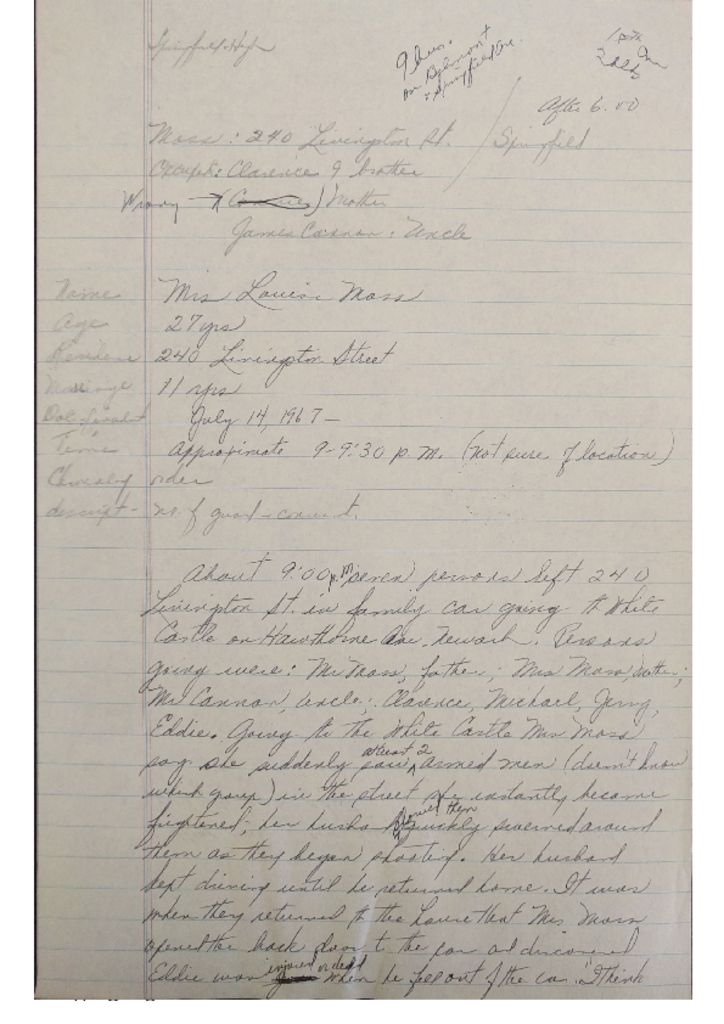 Notes of Newark Legal Services Project on an interview with Louise Moss, mother of Eddie Moss, at the family’s apartment on Livingston St. Mrs. Moss recounts the events surrounding the fatal shooting of her son, claiming “I think they must have been aiming for his head the way he was shot.” — Credit: Junius Williams Collection 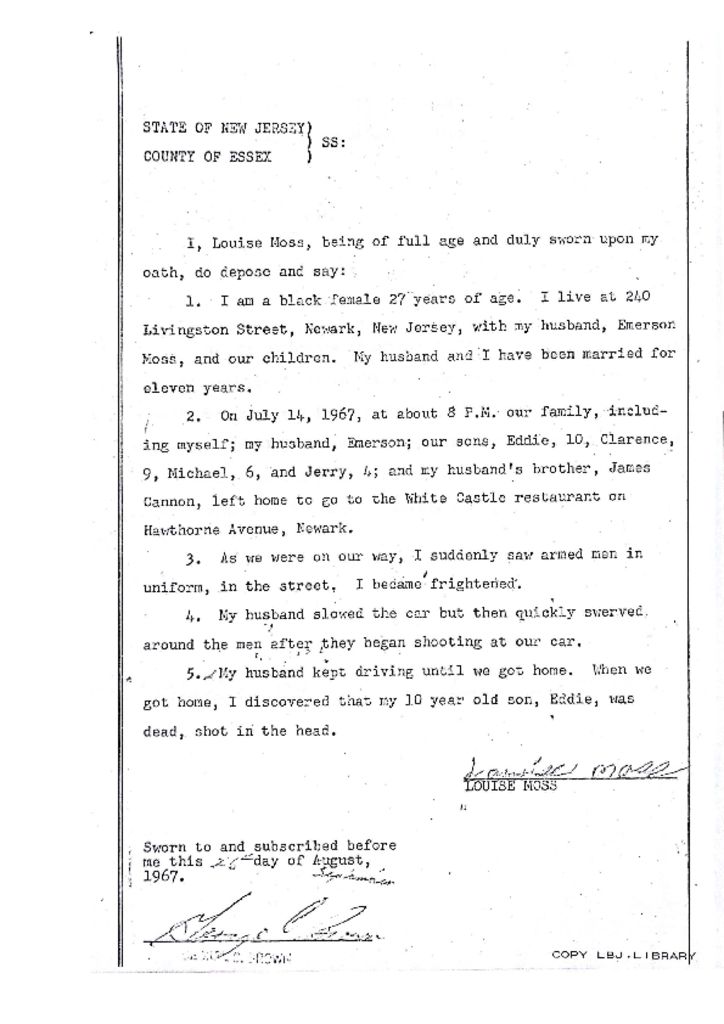 Deposition of 27-year-old Louise Moss before the Essex County Grand Jury, in which she describes finding her 10-year-old son, Eddie Moss, “dead, shot in the head” by National Guardsmen. — Credit: Newark Public Library