Thomas Thompson was born sometime around 1768 in New Jersey, and moved to Newark with his master, Daniel Bize, said to have been one of the richest men in Newark in 1800. Bize set Thomas up in stagecoach business in the early 1790s, and freed him in his will upon his death in 1800. Thomas Thompson became the richest free person of color, owning three houses, a stage, and horses.

Thompson married Martha Ann, who according to the 1850 census, was a black woman born in Holland. They had four known children, among them, a daughter Mary, who married Jacob King, born in Newark in 1806.

It is this union that set in motion a remarkable chapter in the African American struggle for empowerment in Newark.

Jacob King bought land from Rev. Christopher Rush in 1828, and upon this land located at 70 Warren Street, built a house where he and his wife raised seven daughters and maintained a house on the Underground Railroad. The 1830 census shows the King house next to that of her father and mother, the Thompsons, whose stagecoach carried white passengers and their property to Philadelphia, New York, and all the way up to Albany. Recently discovered photos show the secret cellar that was built in the house, a closet where slaves could hide, an opening to the outside, and an old Dutch oven where Mary cooked for the escaped slaves hidden in the cellar. With horses and stage coach right next door driven by the trusted businessman and driver Thomas Thompson, it doesn’t take much imagination to figure out how slaves escaped to freedom because of the Thompson-King family partnership.

The house at 70 Warren Street stayed in possession of the King family for 106 years. The land where the house once stood, as well as the Thompson house next door, is now owned by Rutgers University Newark, and is home to the RU athletic field, near the corner of Warren and University.

The Thompson family was among the founding members of the Plane Street Colored Presbyterian Church in 1834, whose second pastor was the noted abolitionist Rev. Samuel Cornish who along with John Russwurm created the first black newspaper in the United States, Freedom’s Journal, before moving from New York to Belleville, and later Newark.  Rev. Cornish was also an opponent of the American Colonization Society, which urged African Americans to settle in Africa.

The King family was among the founding members of what is now called Clinton Memorial AME Zion Church, then located on Academy Street, whose first pastor in 1822 was Rev. Christopher Rush.

Throughout the 1830s and 40s, the King brothers and other members of the Anti-Slavery Society remained active in the abolitionist cause, and in opposition to the African colonization movement.

In 1839, the Essex County Anti-Slavery Society was founded, also centered in Newark.   Its meetings were usually held in Methodist or Presbyterian churches, and its members were active clergymen or religious laymen.

Also in 1839, John King wrote an article giving the Order of Service for the 1839 “First of August Celebration” in Newark, celebrating the end of slavery in Britain. The services started at the Plane Street Colored Presbyterian Church.

“Perhaps the prime grievance of African Americans in New Jersey down to 1870 was their disenfranchisement.  In 1807, the state legislature restricted voting rights to white males, eliminating privileges that the state’s 1776 constitution had extended to both blacks and women. Despite sustained opposition by African Americans and their supporters, the state’s 1844 constitution continued to limit the vote to white men.”

For much of the first half of the 19th century, African-American politics was dominated by a handful of black men and women, representing a small community within a growing sea of white immigrants, most of them hostile to the black cause. They were victims of violence, and despite the middle class status of the leaders mentioned above, most of their constituents within colored churches and other social organizations were poor. They worked jobs at the bottom of the economic ladder, such as laborers, “hod”carriers, ditch diggers, domestic workers and porters.

“By 1870, the labor supply offered by white immigrants had reduced the position of blacks in the skilled crafts and precluded their employment in the industrial concerns that were springing up in the state’s urban centers.” African American workers combined to protect themselves through “mutual aid societies” and fraternal lodges, providing financial aid in time of need, rather than as collective bargaining units.

Clip from an interview with Teresa Vega, member of the Afro-American Historical and Genealogical Society (AAGHS), in which she discusses how her genealogical research led her to uncover her family’s abolitionist roots in Newark in the early 1800s. 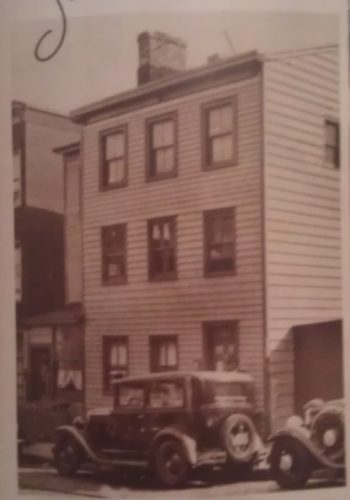 This is the house at 70 Warren Street where Jacob King and his family lived and harbored “fugitive slaves” travelling North on the Underground Railroad. — Credit: Newark Sunday Call 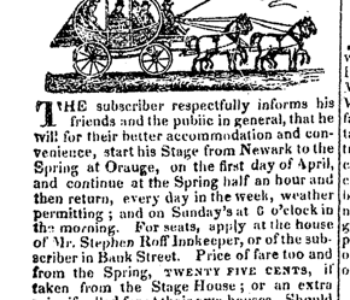 Advertisement from an unmarked newspaper announcing the stagecoach services of Thomas Thompson in Newark. After being freed by his former master, Thompson became one of the wealthiest free African Americans in Newark and was actively involved in the Underground Railroad in the city. — Credit: Teresa Vega Files

David Lawrence and Sham Malhotra demonstrate their architectural 3-D rendering of the Jacob D. King House at 70 Warren Street. Watch the video to take a virtual tour of this significant stop on the Underground Railroad and learn about how the home was used to help self-emancipated slaves on their way to freedom. –Credit: Junius Williams Collection

Clip from an interview with Teresa Vega, in which she discusses Newark’s free Black community and their strugles for the right to vote. Vega describes how free Black property owners in New Jersey had the right to vote after the Revolutionary War, but were disenfranchised in 1807. –Credit: Junius Williams Collection 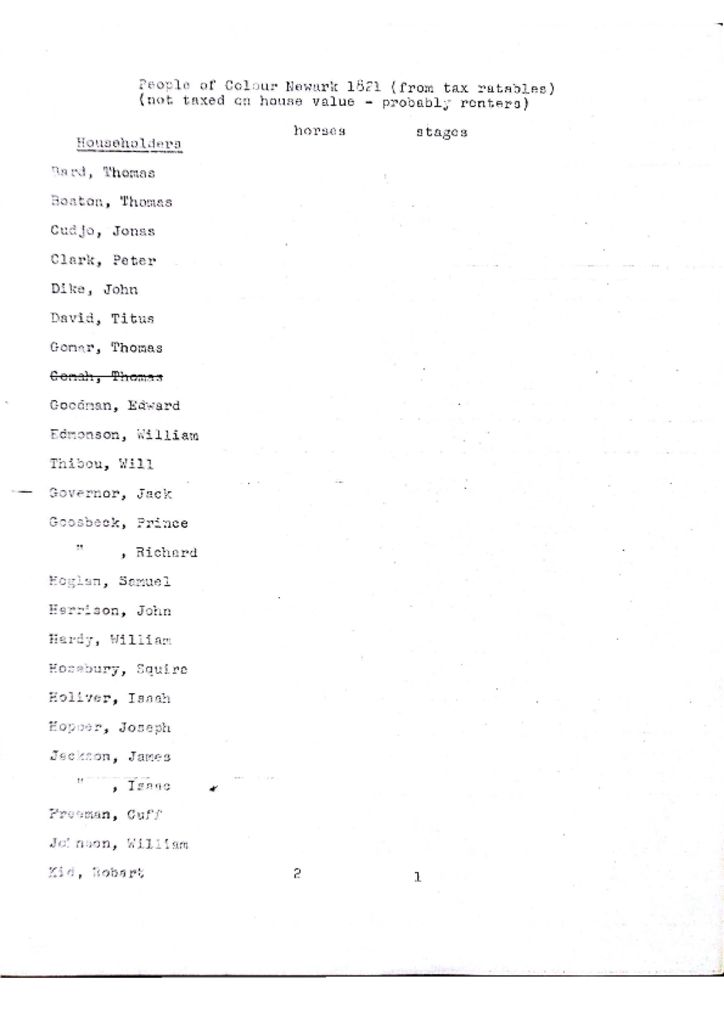 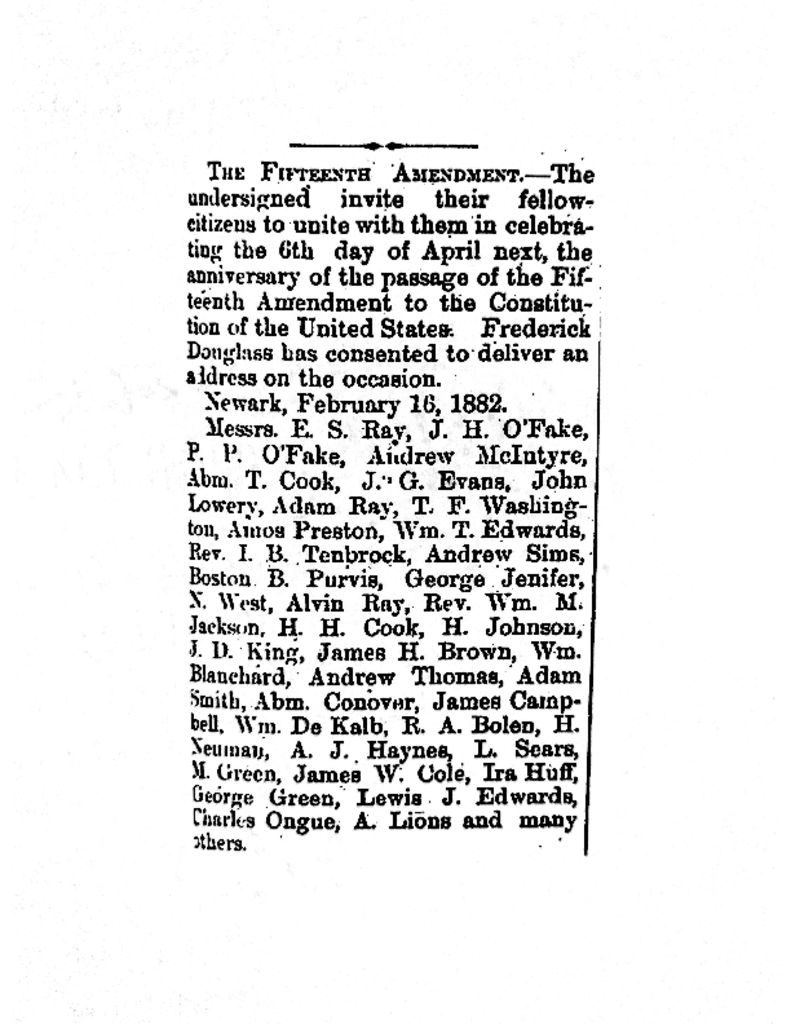 Unmarked newsclipping announcing a celebration to commemorate the passage of the 15th Amendment. Frederick Douglass delivered an address at the event, which was held April 6, 1882. — Credit: Newark Public Library 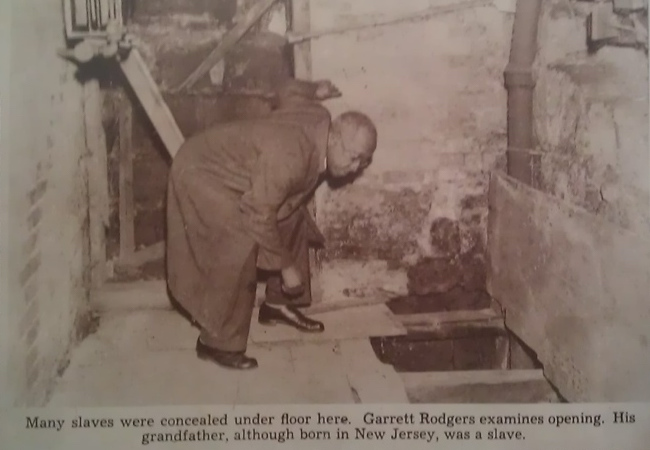 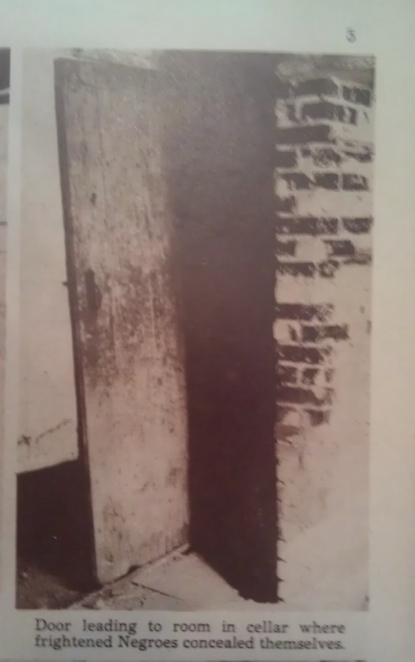 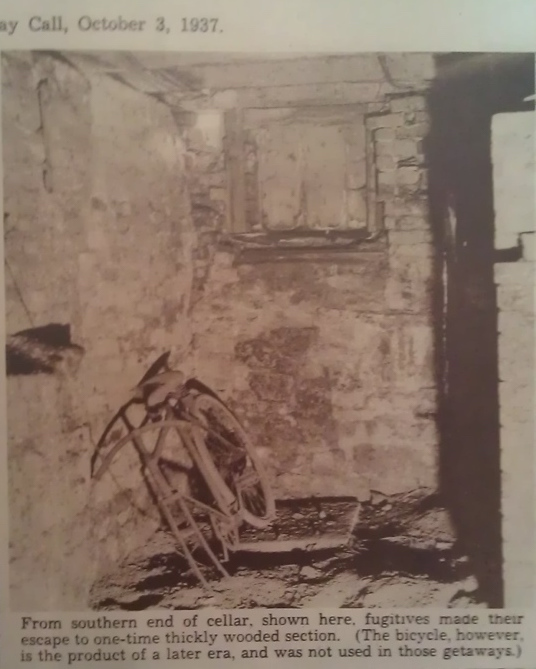 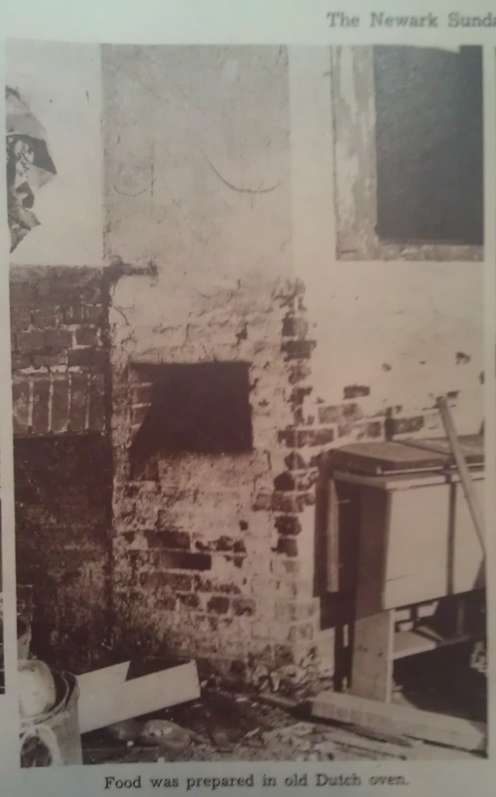 In 1828, the King brothers, Samuel and Abraham, set up the first “Colored School” which ran until 1909, with classes originally in the AME and Plane Street Presbyterian Church. The King brothers walked into a Newark Town Meeting, demanded and obtained city assistance to finance the school. In 1864, a 19-year-old black man named James Baxter was asked to accept a teaching position at the Colored School, and went on to become its Principal for 45 years. Two of the King daughters, Marcia and Harriett, were also teachers in the school.

Clip from an interview with Teresa Vega, member of the Afro-American Historical and Genealogical Society (AAGHS), in which she discusses the 45-year tenure of James Baxter as principal of the Commerce Street Colored School in Newark. Baxter’s tenure as principal ended when the Newark Board of Education voted to end segregation in the city’s public schools in 1909. 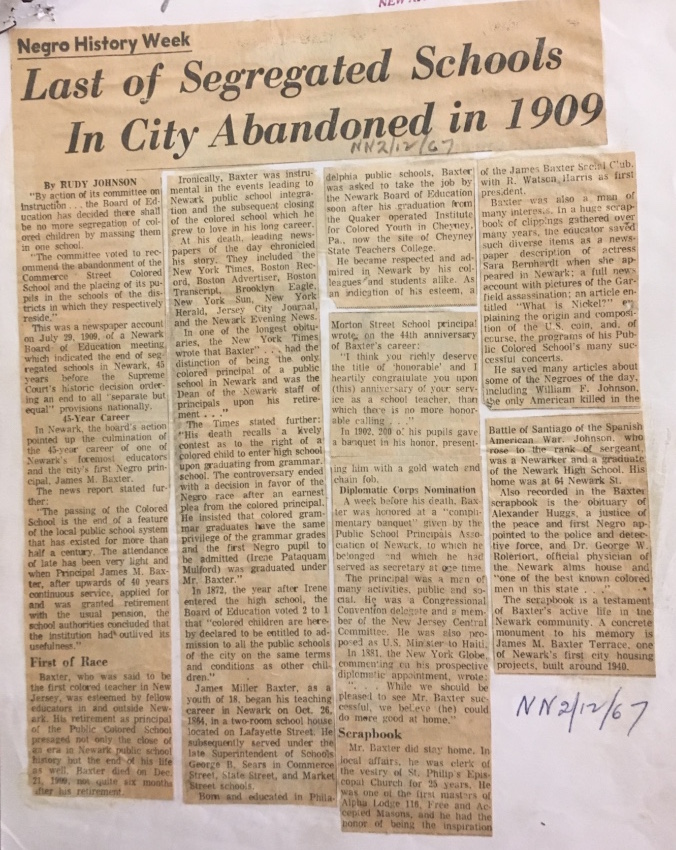 Last of Segregated Schools in City

Article from the Newark Evening News detailing the history of segregated schools in the city. The Commerce Street Colored School, the last of Newark’s segregated schools, was disbanded in 1909. — Credit: Newark Public Library 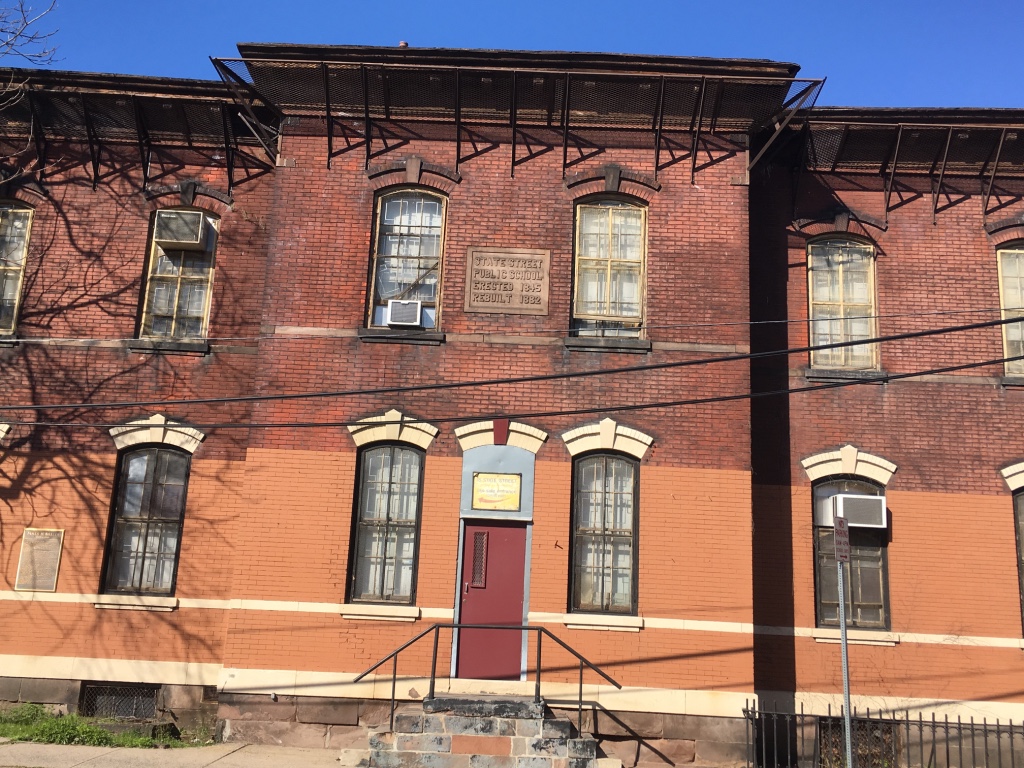 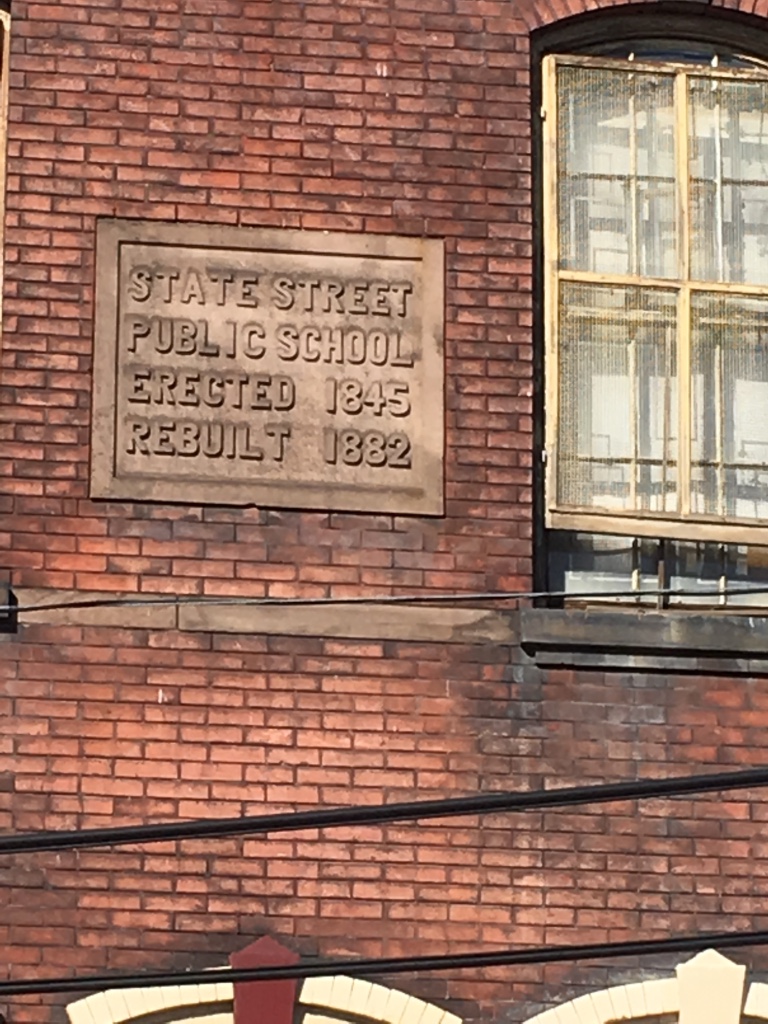