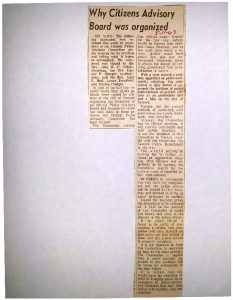 Editorial from an unmarked newsclipping carrying a statement released by the newly-formed Citizens Police Advisory Committee. The Committee, formed in response to Mayor Addonizio’s rejection of a police advisory board, was proposed as an unofficial and independent organization to hear complaints of police misconduct.The statement makes reference to a petition organized by George Richardson which collected 18,000 signatures requesting the formation of an official police advisory board. — Credit: Newark Public Library