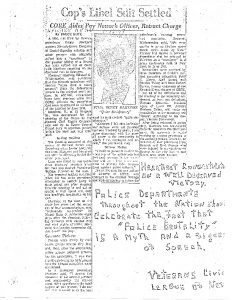 This article from the Newark Evening News was turned into a flyer by the Veterans Civic League of Newark to celebrate the settlement of Newark Patrolman Henry Martinez’s libel suit against civil rights leaders. Martinez filed suit against James Farmer, Robert Curvin, Fred Means, and others for “libelous and slanderous” statements made against him after the patrolman fatally shot Lester Long. The shooting of Lester Long and demands for a police review board were highly polarizing events along racial lines in Newark. The Veterans Civic League of Newark was one of several white reactionary organizations, including police unions and patrolmen, that sought to combat measures for police reform. — Credit: Junius Williams Papers