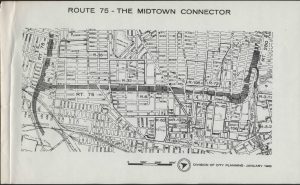 Map of the proposed Route 75 “Midtown Connector” highway in Newark, prepared by the Division of City Planning. Highway construction in northern urban areas has historically involved the destruction of predominantly Black communities for the benefit of predominantly white suburban commuters. Route 75 was one of the most heavily-contested commuter highway proposals in Newark. Despite years of opposition from Black and Puerto Rican communities in Newark, city officials continued to push forward with plans for the highway’s construction, before finally abandoning the project.