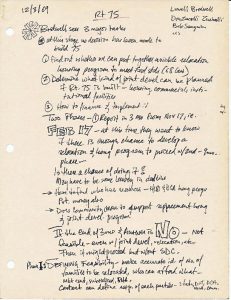 Notes from Washington, D.C. activist R.H. Booker on strategies and tactics for fighting the development of Route 75 in Newark. Route 75, an eight lane highway planned to run North to South, would have cut the Central Ward in half and displaced thousands of Black and Puerto Rican residents.