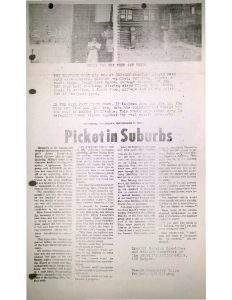 Flyer distributed by the People’s Action Group (UCC Area Board 3) and the Newark Community Union Project to protest the eviction of Mrs. Emma Gaskins. Many housing units in the Central Ward and Clinton Hill were owned by absentee landlords who lived in the suburbs and allowed the apartments to deteriorate. To protest the eviction of Mrs. Gaskins, NCUP and the People’s Action Group distributed this flyer in Millburn, where her landlord Phil Kaufman lived, to encourage the man’s neighbors to talk with him about the conditions in his rental units. — Credit: Newark Public Library