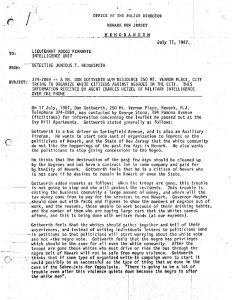 Memo from the Newark Police Department regarding attempts to “organize white citizens against Negroes in the city.” The organization, known as Loyal Americans for Law and Order (LALO), was formed during the 1967 Newark rebellion by a man named Don Gottwerth. The organization supported the police, most notably in the campaign for a police canine corps immediately after the rebellion.