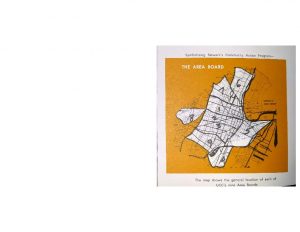 Map from the United Community Corporation (UCC) Program Report of 1965-1966 showing the locations of the UCC’s Area Boards in Newark. According to Executive Director Cyril Tyson, the Area Board districts generally conformed to the ward boundaries, which “made it seem that some parallel potentially political structure was being set up in Newark.” — Credit: Newark Public Library