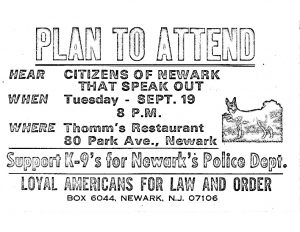 Flyer from the Loyal Americans for Law and Order (LALO), which was formed during the 1967 Newark rebellion by a man named Don Gottwerth. The organization mobilized white fear and resentment and supported the police, most notably in the campaign for a police canine corps immediately after the rebellion. The proposed “canine corps” for the Newark Police Department was a hotly contested issue in the aftermath of the rebellion.