James Rutledge, Jr. was 18-years-old when he moved back to Newark from Trenton to live with his father in 1966. A year later, 19-year-old Jimmy Rutledge entered Jo-Rae’s Tavern on a Sunday afternoon, as four days of rebellion in Newark had finally begun to recede. The night before marked a new phase of the disturbances, as state police and National Guardsmen roamed the city’s streets, destroying and looting Black-owned businesses in retribution for the previous nights’ tours of duty.

This was the context when Rutledge and friends entered Jo-Rae’s, a business that had already been broken into and looted days before. The young men were on their way out of the building when police arrived on the scene, driving them back inside for cover. The police approached the store and trapped the young men inside.

Junius Williams, who was then director of the Law Students VISTA Program, an affiliate of the Newark Legal Services Project affiliate, later wrote about his investigation of the scene at Jo-Rae’s:

“Through my sources, I found and interviewed a witness to the execution of James Rutledge by the state police inside of Jo-Rae’s Tavern at the corner of Bergen and Custer avenues. Two young men were in the bar looking for something that may have been overlooked in the original looting. They were surprised by the state police, and couldn’t get out of the bar. They initially hid, but Rutledge stood up, his hands in the air while the witness stayed hidden behind the broken and smashed bar. The witness recounted hearing the conversation among the state police. ‘Well, look what we have here…a nigga caught in the act!’  Rutledge died a horrible death, shot thirty-nine times, including in the top of his head after he had fallen to the floor. Had the witness stood up, he too would have been killed, but the police were satisfied and searched no further. I converted my notes into an affidavit, as I had been taught to do by Annamay Sheppard, and gave the signed document to Oliver Lofton.  Amiri Baraka found out about the slaying, and went to the funeral home and    had pictures taken of the corpse. In the days that followed, pictures of the mutilated body were mimeographed on a flier and passed out in the community. Eventually I was called before the Essex County Grand Jury and asked by the assistant prosecutor, ‘Don’t you think it was inflammatory to put pictures on a flier?’

‘First of all,’ I told him, ‘I wasn’t responsible for the fliers.’ And then I asked him, ‘Don’t you think it was inflammatory that James Rutledge was shot thirty-nine times?’ We must have eyeballed each other, but then the prosecutor let me go. Blame always rested upon us in the community, and not on the police who were allowed to riot and kill with impunity. Even with the scathing condemnation of police violence in the report of the Governor’s Select Commission on Civil Disorder, no police officers or National Guard were ever prosecuted.”

Jimmy Rutledge was dead at the age of 19 after having been shot 39 times by city and state police officers while hiding behind a counter in Jo-Rae’s Tavern on Custer Avenue. According to one of he Newark police officers involved, ‘I didn’t say I ever saw anybody attacking, I just opened fire. I don’t believe I saw any knife in the tavern…” 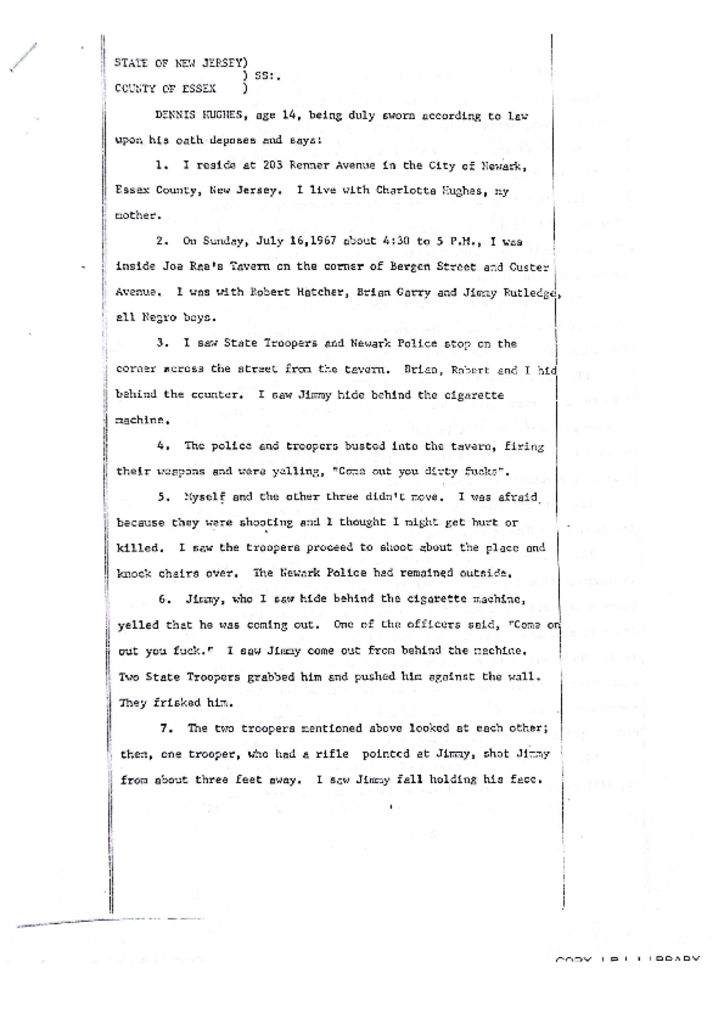 Deposition of Dennis Hughes, in which he describes the fatal shooting of James Rutledge by State Troopers and Newark Police on July 16, 1967. — Credit: Newark Public Library 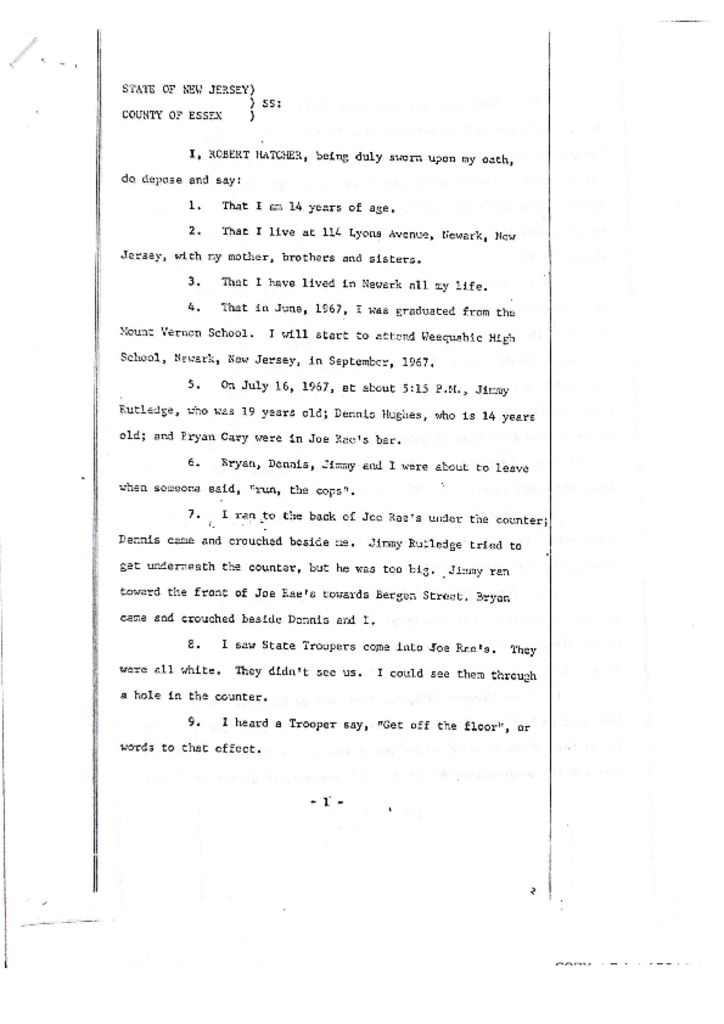 Deposition of Robert Hatcher, in which he describes the fatal shooting of James Rutledge by State Troopers and Newark Police on July 16, 1967. — Credit: Newark Public Library 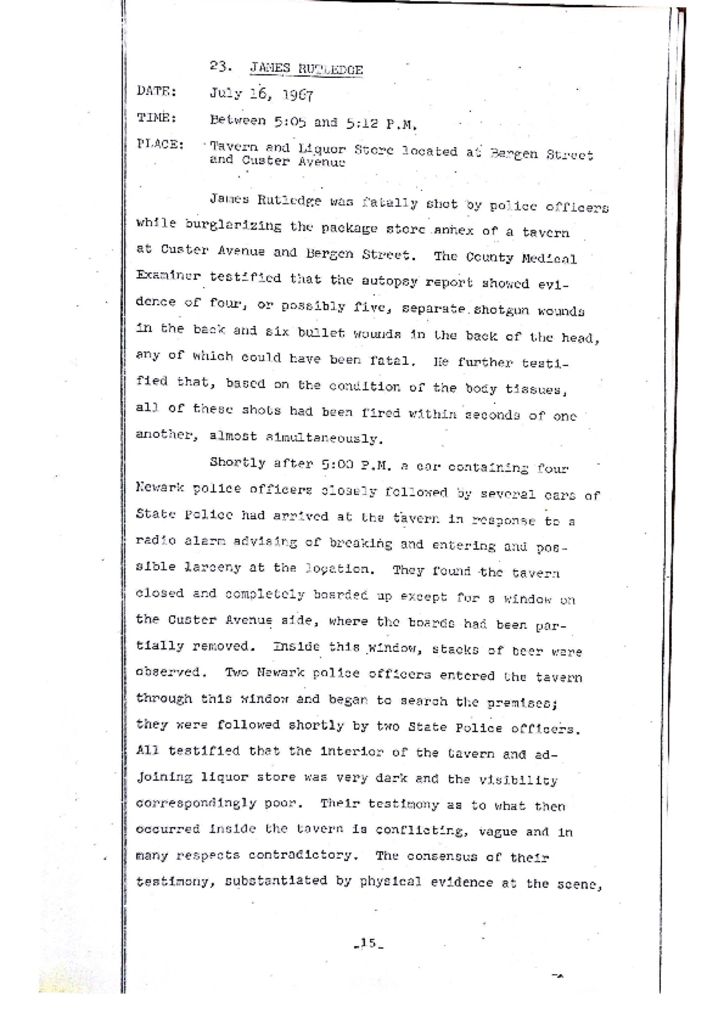 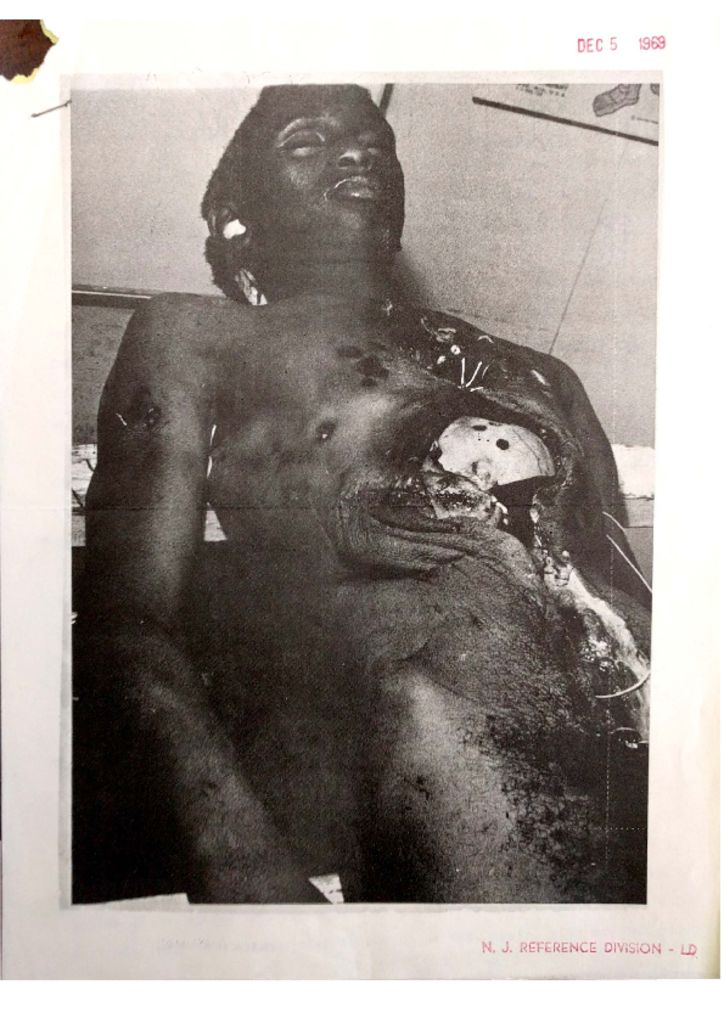 Flyer distributed by Amiri Baraka and others depicting a photo of James Rutledge in the city morgue, along with accounts and analyses of the rebellion titled the “Black Survival Bulletin.” The photographer was C. Danny Dawson, who said of the photo, “The body would have looked worse if it hadn’t been opened for embalming.” — Credit: Newark Public Library 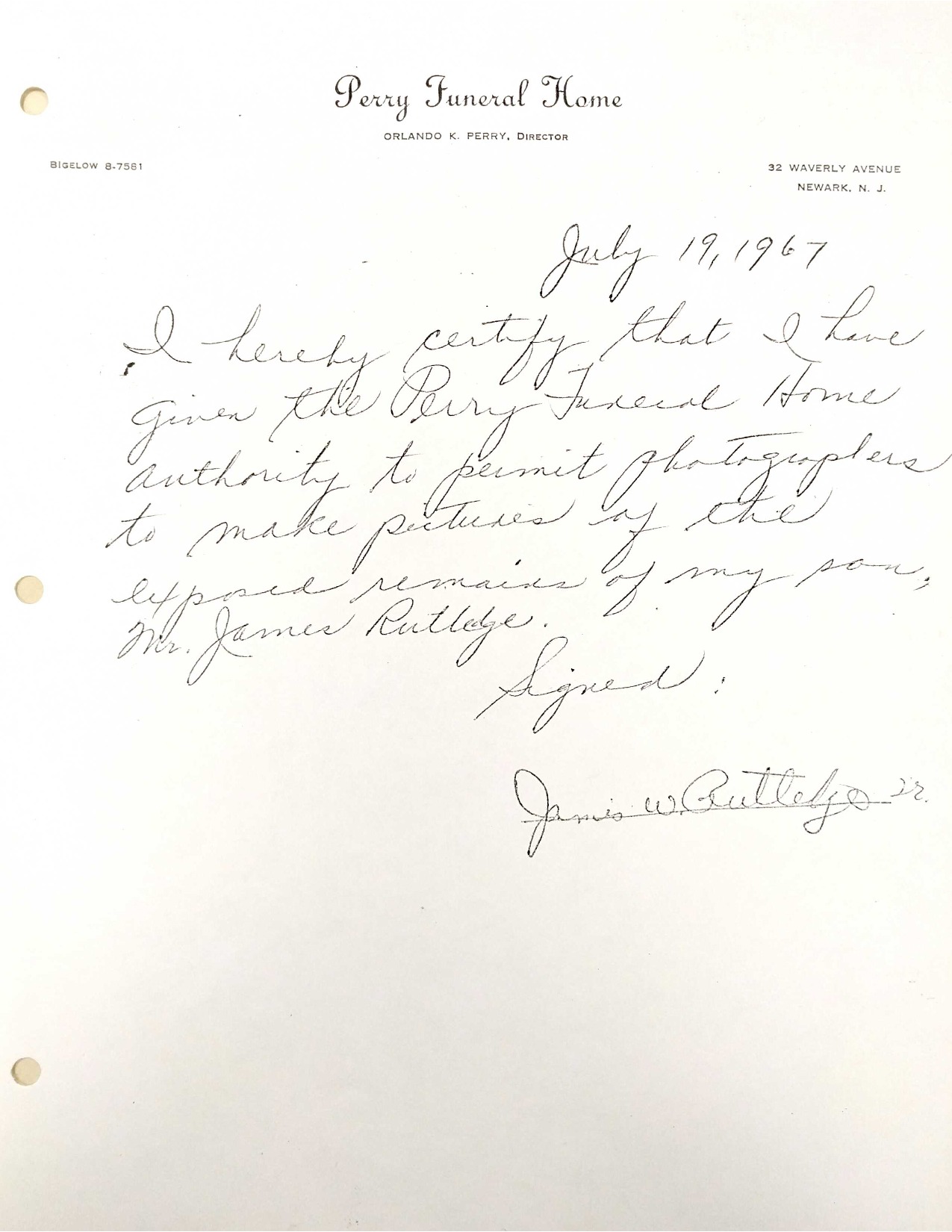 James Rutledge, Sr. wrote this note, giving the Perry Funeral Home the authority to permit photographers to take pictures of his son’s body after he was gunned down by city and state police on July 16th. A photograph of James Rutledge, Jr.’s body in the morgue was distributed throughout the city and gained notoriety with the Essex County Grand Jury. According to photographer C. Danny Dawson, “The body would have looked worse if it hadn’t been opened for embalming.” Rutledge was shot 39 times. — Credit: New Jersey State Archives