Flyer- Who Will Control the Poverty Program_ 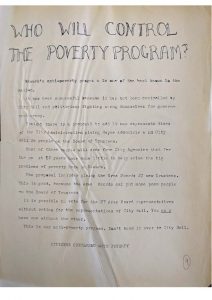 Flyer distributed to warn against City Hall control of the United Community Corporation and encourage community members to vote for representatives from their neighborhood to the UCC Board of Trustees. City officials in Newark feared that the antipoverty program would undermine their political power in the city and moved to exert control over the antipoverty agency. — Credit: Newark Public Library

Flyer- Who Will Control the Poverty Program_