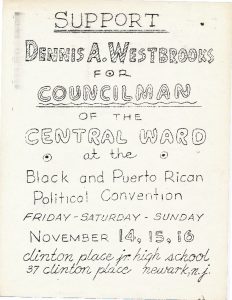 Flyer distributed by supporters of Dennis Westbrooks to promote his candidacy for Councilman of the Central Ward at the Black and Puerto Rican Convention. The Convention was held in Newark from November 14-16, 1969 to formally select the “Community’s Choice” for Mayor and City Council in the 1970 election.