Eloise Spellman lived in a 10th floor apartment in the Hayes Homes project at 322 Hunterdon Street. Mrs. Spellman shared this apartment with her eleven children, ranging in age from six-months to 18 years of age. On Saturday, July 15th, Mrs. Spellman was in the apartment with all of her children, along with two of their friends and a cousin. Around 6:30 that evening, the Spellman children and company were hanging out in the kitchen when, according to 18-year-old Bruce Spellman, “I heard a rapid firing from outside. Then I heard a scream in the front room where my mother Eloise Spellman was.”

The Eighth Essex County Grand Jury of 1967 stated in their presentment, “State Police and National Guardsmen…had responded to the area because of reported sniper fire…” Although “sniper fire” was widely reported by police and National Guardsmen, very little evidence was found to support the 258 reports of “sniper incidents” claimed by city and state police. Furthermore, reporting “sniper fire” was used as a justification for the indiscriminate shooting of innocent civilians, as in the cases of Eloise Spellman, Rebecca Brown, and Hattie Gainer, who were all killed in their Hayes Homes apartments within minutes of each other.

When Bruce Spellman and his siblings heard screaming coming from the front room of their 10th floor apartment, they quickly left the kitchen to see what had happened. Their mother, who had gone over to close the window amidst a barrage of gunfire, was slumped over on the couch—on the lap of their 13-year-old sister Doreen. Mrs. Spellman had been shot through the shoulder and neck.

As the Spellman children tried their best to administer first aid to their mother, their cousin Edward Nichols made his way down to their apartment to help.

“We went into Lois’ apartment,” Nichols recalled. “I saw Lois on the floor. She told me she had been shot. I saw the wound. She grabbed my arm. ‘Please take care of the kids. Will I be all right, Eddie?’ Mrs. Spellman drifted into a delirious state as bullets continued to rip through the apartment. About an hour later, an ambulance finally arrived and Mrs. Spellman was taken down the elevator by Newark policemen who had entered the building in search of “snipers.”

“On the following day,” Richard Spellman later said, “at about 11:00 A.M., Mrs. Horne came up to Edward Nichols apartment 11C where we were all now staying and called Edward out into the hall. She spoke to [him] for about 2 minutes and then she and Edward returned. I immediately asked Mrs. Horne if my mother was dead, and she told me that she was.”

According to Junius Williams, who worked for the Newark Legal Services Project during the rebellion, “That particular situation sparked a lot of reaction in the community. There were attempts made to help that particular family because it was such a glaring example of somebody who should not have been killed. She was a female, she was in her home, she had a lot of children, she was on welfare. It was kind of a prototypical story that folks could relate to. It was not a man who was coming out of a store looting with a bottle of beer in his hand and got shot down by police.”

Eloise Spellman was dead at the age of 41 after being shot by State Police and National Guardsmen through the window of her 10th floor apartment in front of her children. Mrs. Spellman’s death left her 11 children parentless and subsequently split up. According to Porambo, “The three over eighteen went to live with other relatives and the Essex County Welfare Department placed four others in a private home. Four others became state wards in a foster home.”

The Essex County Grand Jury found “no cause for indictment” of any State Police or National Guardsmen involved.

Notes of Newark Legal Services Project on Interview of the Spellman children, July 16, 1967 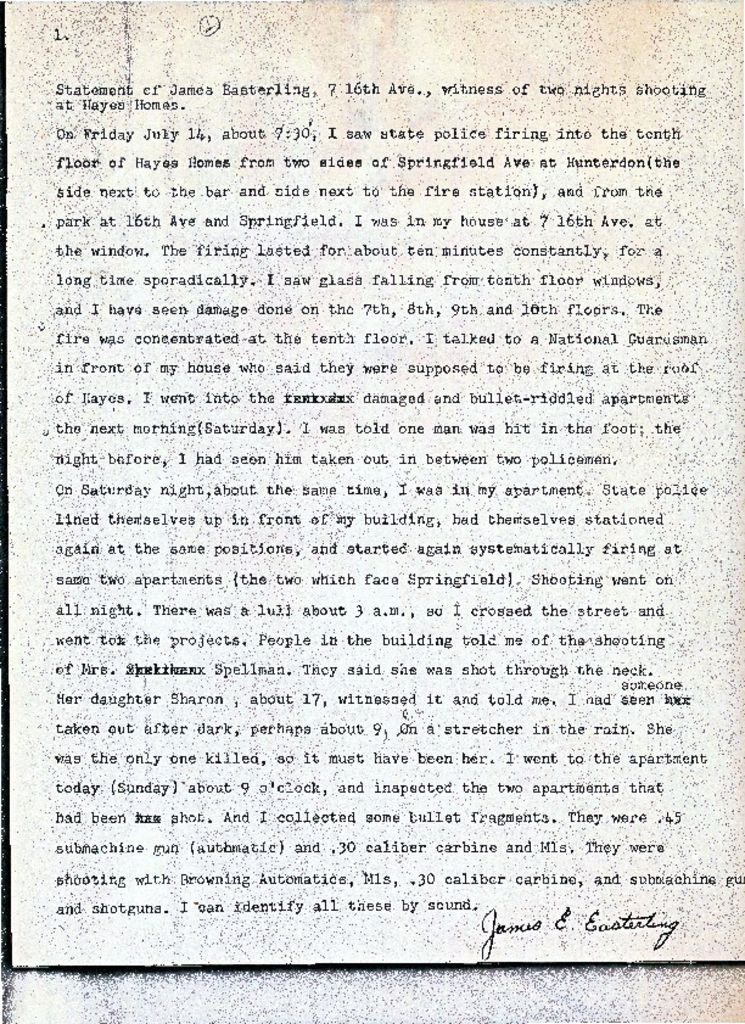 Statement given by James Easterling to Newark Legal Services Project, in which he describes witnessing State Police and National Guardsmen shooting into the Hayes Homes. — Credit: Junius Williams Collection 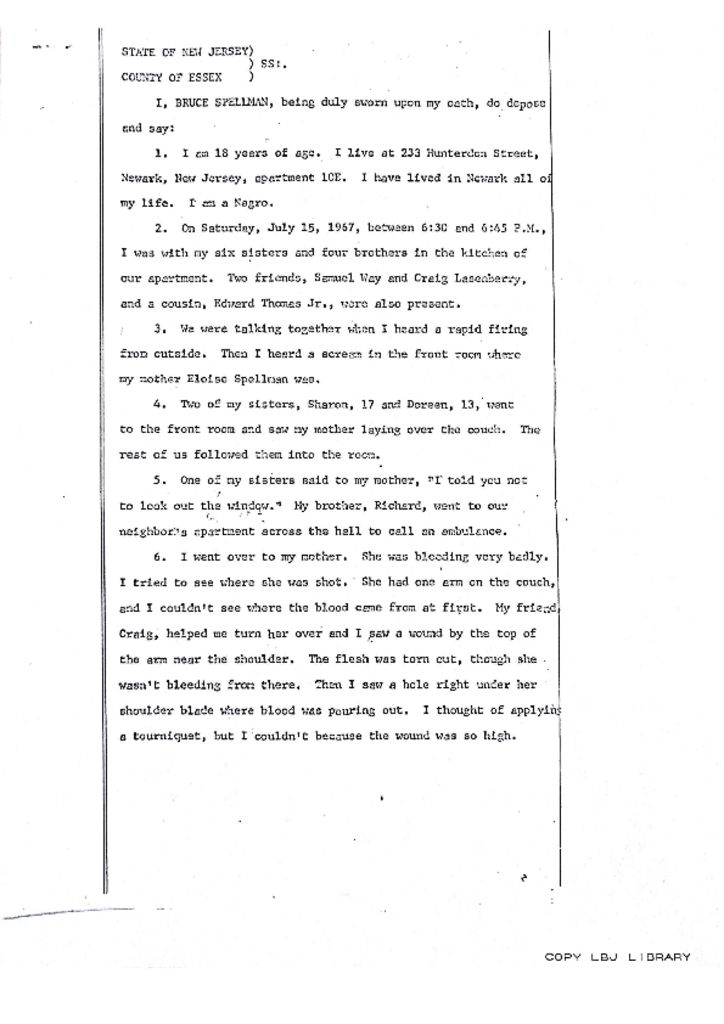 Deposition of Bruce Spellman, in which he describes the fatal shooting of his mother, Eloise Spellman. — Credit: Newark Public Library 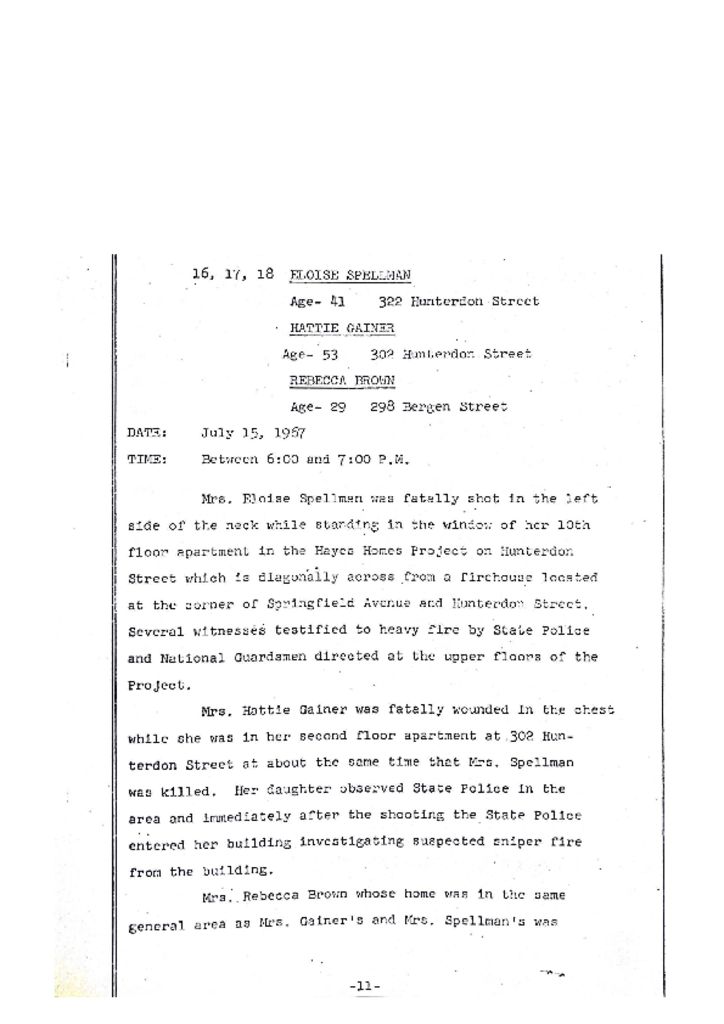 Grand Jury report describing the fatal shooting of Eloise Spellman on July 15, 1967, who was shot while looking out the window of her 10th floor apartment in the Hayes Homes Projects. The report states that she was an “innocent victim” of shooting by State Police and National Guardsmen responding to reports of sniper fire in the area. The Grand Jury found “no cause for indictment.” — Credit: Newark Public Library 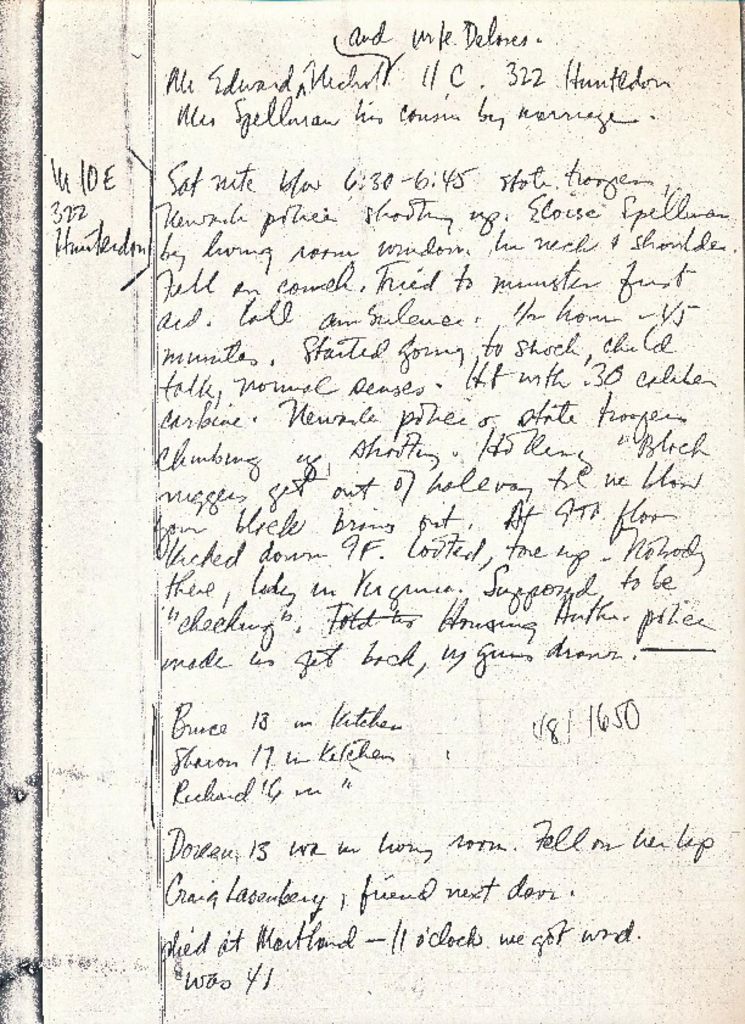 Newark Legal Services Project notes on interviews of Edward and Delores Nichol, in which they describe the shooting of Eloise Spellman. — Credit: Junius Williams Collection

Clip from the documentary “Newark: The Slow Road Back,” in which Junius Williams describes the actions of police as “rioting” and the resultant shooting of Eloise Spellman on July 15, 1967. Mrs. Spellman was fatally shot through the window of her 10th floor apartment as State Police and National Guardsmen fired into the building during the 1967 Newark rebellion. — Credit: Sandra King

Deposition of 16-year-old Richard Spellman before the Essex County Grand Jury, in which he describes the shooting of his mother, Eloise Spellman, in their Hayes Homes apartment on Hunterdon Street on July 15. — Credit: Newark Public Library