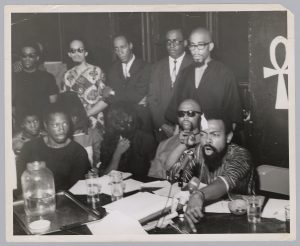 A bandaged Amiri Baraka (LeRoi Jones) holds a press conference inside the Spirit House in Newark during the National Conference on Black Power. Baraka was wounded after being arrested on gun charges and beaten by Newark Police during the 1967 rebellion. To the left of Baraka are cultural nationalist leader Ron Karenga (US Organization) and the mother of James Rutledge (veiled), who was shot 39 times by State Police during the rebellion.