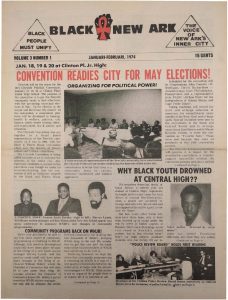 Volume 3, Number 1 of Black NewArk, the local newspaper of the Committee For Unified Newark (CFUN), published in January-February 1974. Black NewArk was one of several media outlets developed by Amiri Baraka to promote Black cultural nationalism in Newark and the nation. This was the final edition of Black NewArk before the newspaper changed to the national paper, Unity and Struggle. — Credit: NYU Tamiment Library