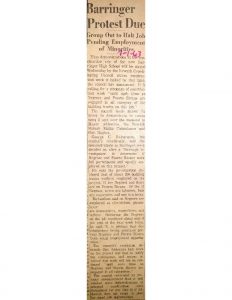 Clipping from an unmarked newspaper, covering the planned demonstrations at the construction site of Barringer High School by the Newark Coordinating Council (NCC). The NCC had given the city government 30 days to take action against hiring discrimination in the building and construction trades and announced that mass demonstrations would follow unless construction work was halted by City Hall. — Credit: Newark Public Library