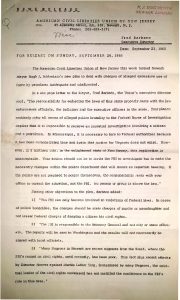 Press release from the American Civil Liberties Union of New Jersey summarizing a letter from ACLU executive director Fred Barbaro to Mayor Addonizio. The letter critiqued Addonizio’s rejection of the police review board, taking particular exception to the Mayor’s plan to forward all allegations of police brutality to the FBI. The referral of these cases to the FBI was seen by many Black and Puerto Rican communities as a token gesture that would provide no redress to victims of police misconduct. — Credit: Newark Public Library