‘I think it is very significant to appreciate that we are not talking about…an isolated incident; we are talking about a pattern that has been witnessed by the community for years, and Smith in my mind represents just a part of that pattern.” –Robert Curvin

The night of Wednesday July 12, 1967, John Smith was carrying a passenger in his taxicab on 15th Avenue in Newark when he was stopped by Newark police officers John DeSimone and Vito Pontrelli. Smith, a 40-year-old African American Army veteran and native of Georgia, had been driving cabs in the city for the past five years.  On that Wednesday evening, Smith was driving west on 15th Avenue when he passed the patrol car of DeSimone and Pontrelli at the intersection of South 7th Street. According to Smith, the police car carrying the two white officers was double-parked and he signaled to the officers that he was going to pass them by flashing his headlights at the car. The officers, however, claimed that Smith had been tail-gating their car and “shot around” them at the intersection.  Officers DeSimone and Pontrelli pursued Smith and pulled him over across the intersection.

After being pulled over, Smith attempted to explain his actions to the officers when DeSimone “jumped out of the car” and placed him under arrest.  The two officers then drove Smith to the Fourth Precinct. While in the car, Smith claimed that DeSimone turned around in the front seat and used his nightstick to beat him. When they arrived at the precinct across from the Hayes Homes Projects, the officers dragged Smith out of the car and across the pavement, claiming that Smith refused to leave the car. Smith, however, said that he was unable to walk because the officers had “kicked him in the groin” while gathering onlookers shouted, “You don’t have to drag him like that.”

While in the car, Smith claimed that DeSimone turned

around in the front seat and used his nightstick to beat him.

When Smith was brought inside the Fourth Precinct, seven to eight policemen took him to a cell and “beat on me some more until I thought it would never stop.” According to Smith, “Another one hit me on the head with a gun butt and I was also hit with a blunt instrument in the side. Finally they just left me lying there.”

Outside the precinct, crowds began to gather and rumors circulated about Smith’s beating. Some speculated that Smith had been beaten to death. Community leaders, including Bob Curvin, Esta Williams, and James Walker, demanded to see John Smith to check on his condition and get him medical attention. Finding Smith bleeding, groaning, crying, and curled in pain, the group insisted Smith be taken to the hospital. By the time Smith was taken out the back door of the precinct to the hospital, 250 people had gathered outside.

and curled in pain, the group insisted Smith be taken to the hospital.

As the crowd continued to swell in size and anger, Curvin, Walker, and community leaders Tim Still (UCC), Don Wendell (UCC), and Oliver Lofton (Legal Services Project) met inside the precinct with Police Inspector Melchior to discuss how to handle the situation outside. The group decided to encourage a march downtown for a demonstration at City Hall to “corral” the anger of the crowd. However, the gathering masses had little interest in following the plans devised inside the precinct or broadcast by bullhorn outside.

To those gathered, this was no longer about John Smith. According to a woman outside the precinct ‘We want to talk about what we see here happening every day…If we are not going to do anything about what we can see from our windows happening in this neighborhood everyday, what the hell good is it?’

Around midnight, a firebomb- an empty bottle, gasoline added, a match-lit cloth wick- exploded against the precinct wall…

Clip from interview with UCC member James Walker, in which he describes witnessing the arrest of John Smith and later seeing him inside the Fourth Precinct. The arrest and beating of John Smith is credited as “the spark” for the 1967 Newark rebellion. — Credit: Henry Hampton Collection, Washington University Libraries Cover of the July 21, 1967 edition of TIME Magazine featuring John Smith. The beating of Smith by Newark Police officers is credited as “the spark” for the 1967 Newark rebellion. — Credit: Newark Public Library

Clip from interview with UCC member Edna Thomas, in which she describes advocating for medical attention for John Smith and the scene outside the Fourth Precinct on July 12. The arrest and beating of John Smith is credited as “the spark” for the 1967 Newark rebellion. — Credit: Henry Hampton Collection, Washington University Libraries Clip from the documentary film “Newark: The Slow Road Back,” in which Newark Community Union Project (NCUP) member Junius Williams describes the outbreak of the 1967 rebellion and the causes leading up to it. — Credit: Sandra King Witness testimony given by John Smith during hearings conducted by the Governor’s Select Commission on Civil Disorders on December 4, 1967. In his testimony, Smith describes the events of July 12, 1967, when he was arrested and beaten by Newark Police Officers. Smith’s arrest and beating are credited as the actions that “sparked” the 1967 Newark rebellion. — Credit: Rutgers University Digital Legal Library Repository Caption from United Press International: “Newark, NJ: A Negro is taken into custody by police of the 4th precinct for refusing to move from area swept by a wave of window-smashing and looting early July 13th. The violence followed a noisy demonstration by Negroes protesting the arrest and alleged beating of a cab driver.” — Credit: United Press International, Newark Public Library Excerpt from the “Chronological Summary of the Newark Riots” prepared by the Newark Police Department. The excerpt includes accounts of the arrest of John Smith on July 12, 1967 and the ensuing confrontations that took place that evening in front of the Fourth Precinct. The arrest and beating of Smith is considered the incident that “sparked” the 1967 Newark rebellion. — Credit: New Jersey State Archive 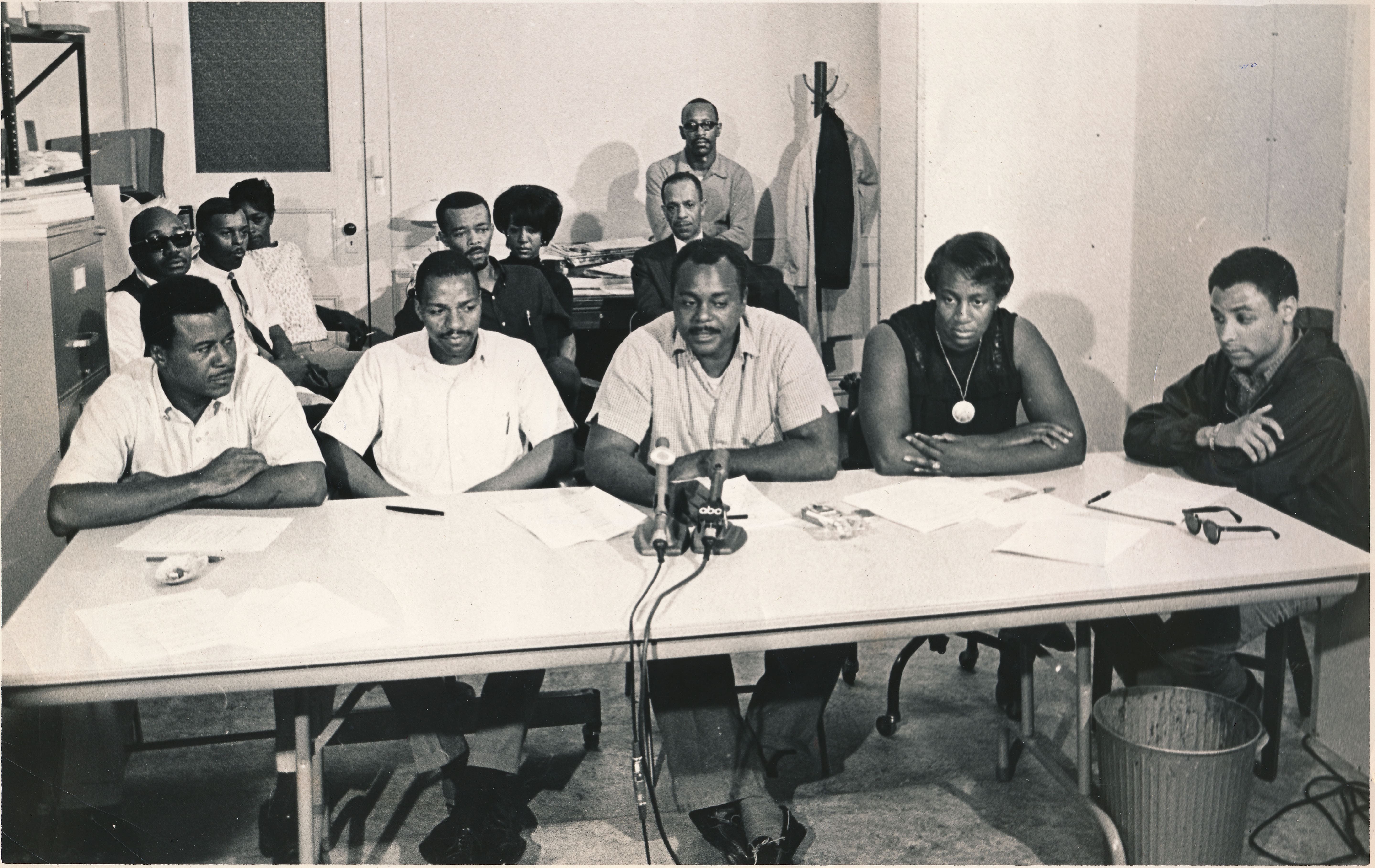 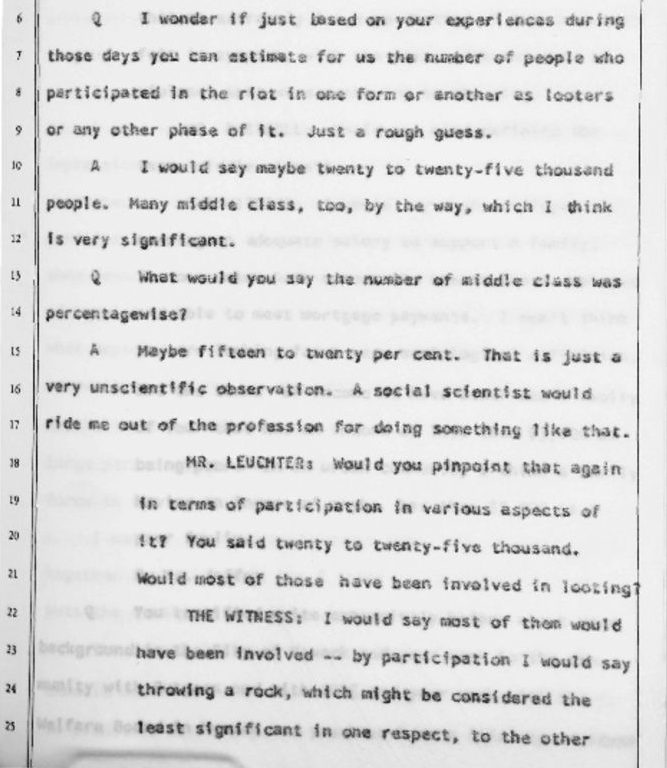 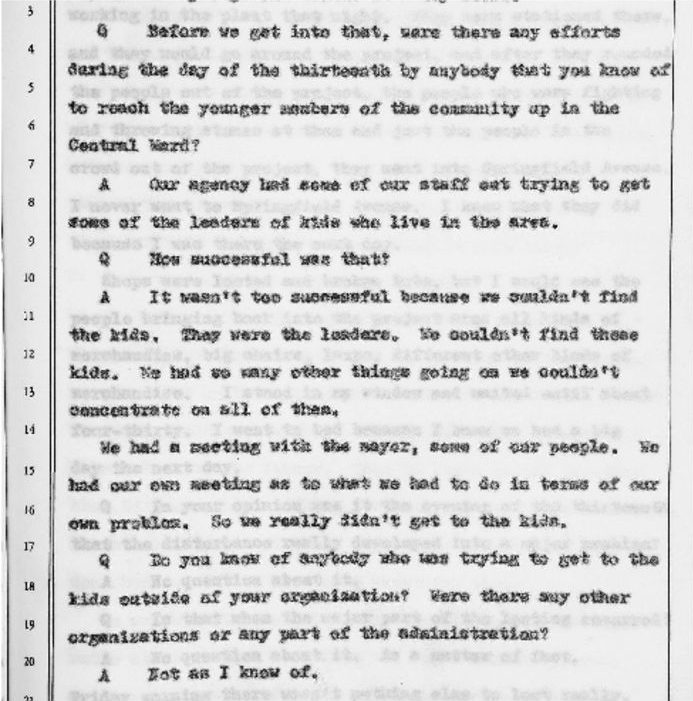 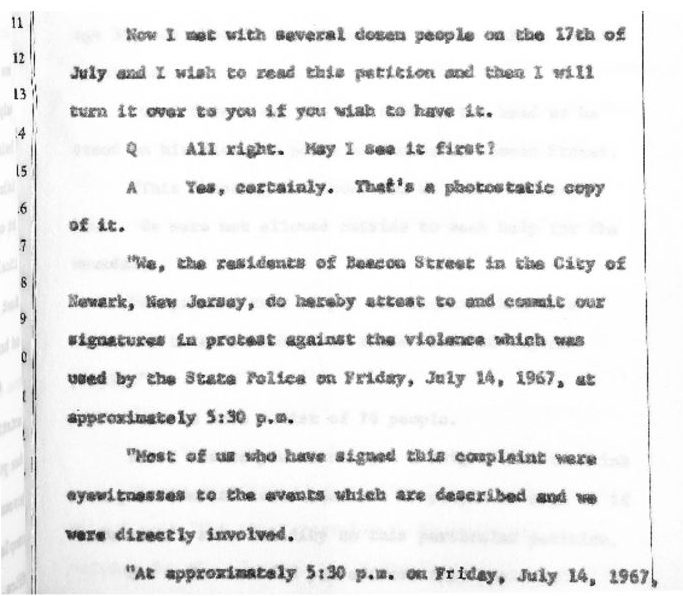